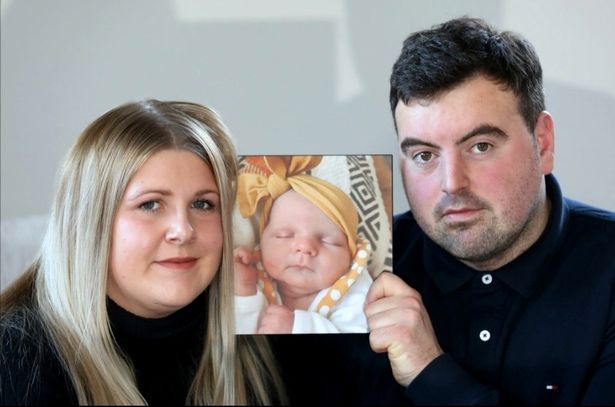 A grief-stricken mum watched her newborn baby die after a nearby community first responder wasn’t sent out to help as they may have found a death ‘too traumatic.’

Megan Thrupp and partner Kris Low have since learned that a first responder was on their street at the time of the tragedy but was not summoned.

The couple were told that community lifesavers are not sent to cases involving children because they may find a death too traumatic.

They believe that early intervention could have saved the life of their 19-day-old baby Eva and are now calling for a change in policy to prevent others experiencing the devastation of losing a child, the Daily Record reports.

First-time mum Megan attempted CPR with the help of an ambulance service call handler, believing trained volunteers were on their way.

It took 35 minutes for an ambulance to reach their home in Anstruther, Fife.

Megan, 25, said: “Our little girl lost her life and we will do all we can to make sure this does not happen to another family.

“Paediatrics matter just as much as everyone else and it is unjust that she was not provided the same chance of survival as another would have been.”

The ambulance service said it is now reviewing the first responder role, including whether they can attend paediatric cases.

Megan, who runs Coast Coffee in the area with mum Marianne Gatherum, was at home with her mother when Eva died on March 13 last year.

Meanwhile, Kris, 30, was at work filleting fish at a local fish shed.

Megan and Marianne first became concerned about Eva’s breathing and called an ambulance.

She said: “I panicked and ran towards my baby, who at this point had stopped breathing.

“The emergency call handler calmly discussed the CPR procedure and told me to apply this to Eva. My mother desperately waited for a first responder to appear as she could see the strain I was under.

“They never appeared and after a long 35 minute wait an ambulance arrived and Eva was finally in the hands of the professionals.”

She added: “The ambulance service think it’s too traumatic for first responders to attend children if there is a negative outcome.

“I think it’s more traumatic for us, to be honest.

“The woman who was on call in Anstruther that day said she would have come if she’d known.”

Megan and Kris are now expecting their second baby together – another girl – and they hope for a breakthrough in their campaign soon.

Megan said: “I would love to see a change in policy. I would hate for anyone else to go through this.”

He said: “I can only imagine how hard this has been for them and I can only hope this never happens to anyone else again.

“I have met with and worked positively with the first responders in north east Fife, meeting with them last year to learn more about their work.

“We must see a review of the responsibilities that first responders have, especially in rural areas like here in north east Fife, in order to make sure that this tragedy is never repeated.”

The Scottish Ambulance Service said it will contact the family directly to hear their story and offer support.

A spokesperson said: “This is a very tragic case and our deepest sympathies are with the family during this time.

“We are limited in what we can say publicly due to patient confidentiality but the Scottish Ambulance Service is committed to developing our Community First Responders (CFRs), as they form an integral part of our response.

“We are currently undertaking a review of the role of CFRs which includes considering the welfare and clinical safety of enabling CFRs to attend paediatric calls.”

Katy Perry shared an incredible photo featuring baby Daisy during special celebration – did you spot it?