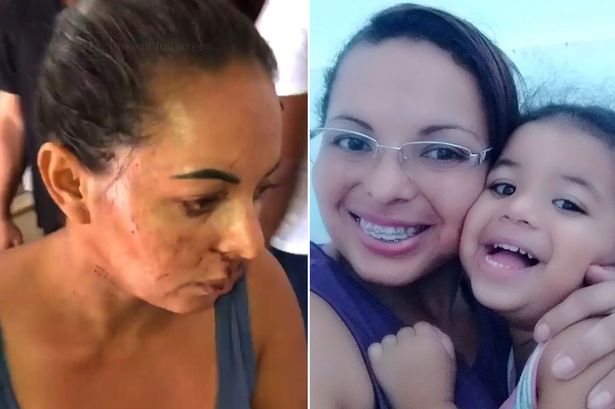 A woman in Brazil has been arrested for killing her own young daughter by gouging out her eyes before cutting out and eating her tongue.

Josimare Gomes da Silva, 30, was arrested at her home for the murder of the five-year-old in the town of Sao Cristovao in the Maravilha municipality in the northeastern state of Alagoas.

The horrifying crime took place on January 24 when the child Brenda Carollyne Pereira da Silva’s grandfather saw blood running from the outside drain.

He broke down the locked bathroom door where he found da Silva praying next to his granddaughter’s lifeless body.

Her eyes had been gouged out and her tongue had been cut off, and investigators believe the injuries – which were inflicted with a pair of scissors while she was still alive – caused her death.

The man told police her neck was also purple as if it had been crushed.

He called the police who came to the house and sedated da Silva before arresting her.

It has also been reported that the mum – who was taken to the police station in the nearby municipality of Delmiro Gouveia, had chewed on her own daughter’s amputated tongue.

Da Silva reportedly gave police a garbled statement to police the next morning in a number of languages including Spanish.

In her statement, she is said to have denied gouging out her daughter’s eyes and putting her tongue in her own mouth.

The suspect is known to suffer from mental health issues including depression, and it is believed she carried out the attack during a psychotic episode.

She is currently being held at a police station and will be transferred to a women’s prison in the state capital Maceio as the case is investigated.

The district attorney for Maravilha, Kleytione Pereira, has requested the woman be hospitalised for her crimes, rather than jailed.

“Due to the circumstances in which they appeared in the fact, with strong indications that the victim’s mother has psychological and psychiatric problems, and that perhaps at the time of the crime she was even in an outbreak,” the Public Prosecutor’s Office said in a statement.