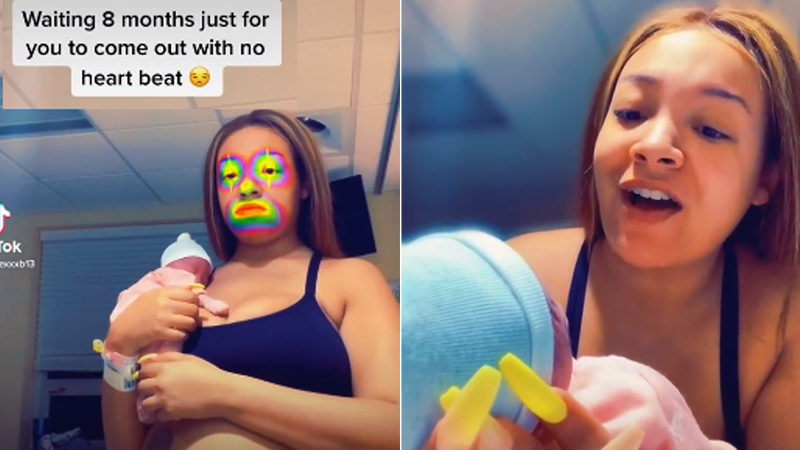 With all the cheap duplication of human emotions, a woman did a pretty good job of showing herself a true human. People are unclear that how much they react but their personalities are darn awful.

It seems to be an over-dramatic statement but a woman dancing with the still-born baby on TikTok is creepy.

People aren’t understanding that why TikTok didn’t remove her video.

User @lexxxieb has been chronicling her pregnancy for months on the popular social media platform and sadly, when it came time to deliver her child, it was born without a heartbeat.

Perhaps she wanted a video with her baby but he died and she overcomes the sadness, the TikToker decided it would be a good idea to celebrate what could have been by dancing with her stillborn baby on the platform.

People are astonished and considering it horrified and offensive that she went “full TikTok” with the clip – from the music choice, the filter on her face, and the fact that she uploaded more than one clip featuring her stillborn.

People aren’t which confident that which is worse than the other: the rainbow clown face clip or the lip-sync video, where she’s mimicking the BoJack Horseman character, Sarah Lynn, as she talks to the baby.

People believe that someone was using their child’s stillbirth as a means of getting on TikTok’s “For You Page.” Therefore, the comments were off.
People can’t even imagine what she has been going through, especially as she wrote that she wanted to cope “in peace.”

One would assume if you’re attempting to “cope in peace,” that might imply you want to be left alone. But by posting a video for everyone to see on the internet, she’s subjecting the world to her coping process.

since the video didn’t violate the policy of TikTok’s, the app left them up; however, moderators ultimately decided to take the clips down. “While it can be difficult for platforms like ours to balance the individual’s need for healing expression with the community’s expectation for a safe viewing experience, our Community Guidelines determined this as the appropriate action to take,” Hashtag Hyena reported.