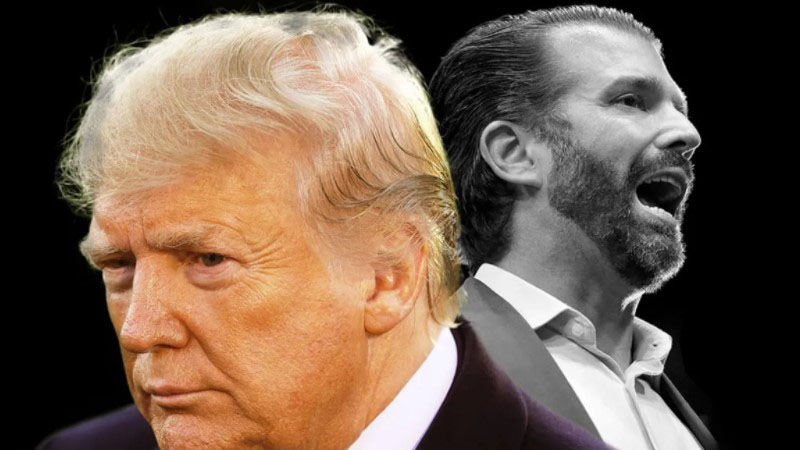 Donald Trump Jr. is taking on a more prominent role as an informal advisor to his father as the former president hurls attacks at Joe Biden and forces of MAGA resistance in the GOP – while contemplating another run for president in 2024.

The president’s eldest son helped run the Trump Organization, along with his older brother Eric and an executive, when Troop took office.

He had already advised Trump’s 2016 campaign, and Don Jr. continued to seek to boost Trump’s election efforts in 2020, while also campaign around the country for Republicans who fit the MAGA mold.

Now, having moved to Florida along with his father, Don Jr. has a prominent role advising his dad, who lives at Mar-a-Lago and fires off barbs through his ‘Save America PAC’ and post-presidential office.

One sign of his eldest son’s influence is a full throated attack from the former president on a transgender issue – an area that Don Jr. has stressed on social media, CNN reported.

Trump was ‘cursing at the television’ when Arkansas Governor Asa Hutchinson got in a throw down with Tucker Carlson on Fox News after he vetoed a transgender bill that the fiery Fox News host said would allow ‘chemical castration of children.’

Days later, Trump’s ‘Save America PAC’ released a statement from Trump blasting Hutchison for the ‘chemical castration of children.’ Donald Trump Jr. has long made the issue of transgender athletes a pet cause.

He brought up the issue during his own speech during the ‘Stop the Steal’ rally January 6th. When Twitter and Facebook banned his father’s accounts after the MAGA riot, Trump Jr. wrote on Twitter that ‘Free speech is dead & controlled by leftist overlords.’

The younger Trump has been working with his father as he decides on his political future, recons with legal troubles, and sorts through his business operations after four years in the White House, while the elder Trump continues to enjoy an active golf regimen.

The president’s daughter Ivanka and son-in-law Jared Kushner both followed Trump to the White House, but the president’s eldest son never took on a White House role. He traveled repeatedly in support of Trump’s campaign and fundraising, and was joined by girlfriend Kimberly Guilfoyle, who took on her own campaign role.

The power couple recently purchased a home in South Florida near Mar-a-Lago.

Trump has made use of his months out of office to pepper opponents with attacks from his pac platform, even if he is still kicked off Twitter, taking on the confrontational tone his son has amplified on the platform.

The former president has gone after ‘Crazy Liz Cheney’ after the GOP rep. voted to impeach him, gone after Sen. Lisa Murkowski of Alaska for the same, and blasted the suspension of Johnson & Johnson vaccine doses, blaming what he calls the Biden administration ‘FDA’s love for Pfizer.’

Trump is told Hannity he is pondering, while suggesting new business moves.

‘And we are working very hard. And a lot of things to do plus some getting more involved for a long time – years I wasn’t involved with the business,’ he told the host. ‘I’m more involved in the business. We’ll see what I do with respect to that. But the business is doing well.’

Asked if he was running again in 2024, Trump told him: ‘I am looking at it very seriously, beyond seriously. From a legal standpoint, I don’t want to really talk about it yet, it’s a little too soon,’ he added.