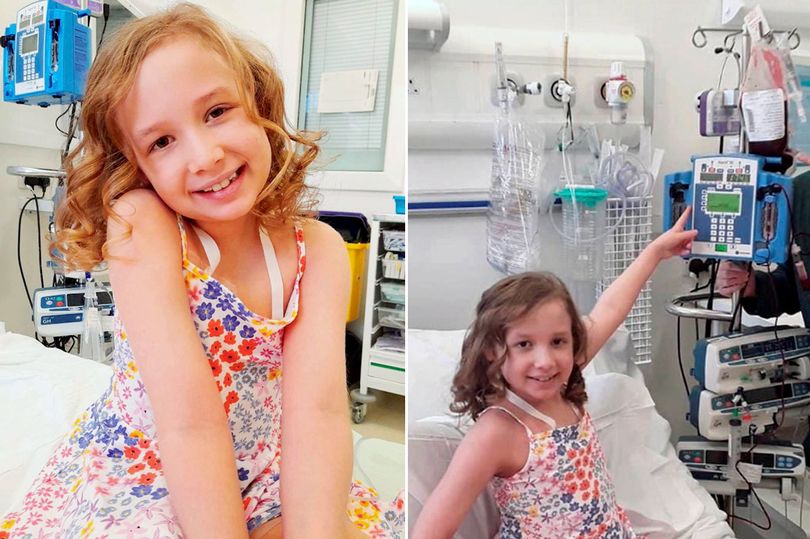 A desperately ill girl has been given a vital transplant after all hope seemed to have been lost.

Evie Hodgson’s stem cell donor backed out at the last minute but her parents hunted high and low for a new “hero”.

Evie, eight, who has a rare blood disorder, said: “You’ve saved my life.”

Her first donor dropping out meant she was unable to undergo vital surgery last year.

But her loved ones refused to give up and after a huge drive for signatures for the stem cell register, a new match was found.

Relieved mum Tina, 37, of Whitby, North Yorkshire, said: “Wow. We actually did it.

“We got Evie to transplant which will hopefully give her the chance of a wonderful future.”

The family must wait three to four weeks to see if the new bone marrow is accepted. “We are not out of the woods yet,” added Tina.

“Evie has been in good spirits and feeling great, which is phenomenal considering what her body has been through this week.”

Evie had the transplant at the Great North Children’s Hospital in Newcastle. Her original donor – then the only match in the world – pulled out in September for unknown reasons.

Tina, who works at RAF Fylingdales, and dad Andy, 49, a chief exec, launched ‘Evie Needs a Hero’ to get as many people as possible to sign the stem cell donor register.

All their hard work was rewarded when a match had been found. Evie thanked everyone who signed up saying:  “You’ve saved my life.

“I can’t wait to go out and ride my bike again and see my friends.”

Tina has spoken of the moment that the news came through of a second donor: “We got the call while Evie was in hospital,” she said. “Evie just turned to me and said, ‘Mummy, you’re my hero’. It was an emotional moment.”

Evie had chemotherapy before her transplant, and faces several more weeks on the ward.

Diagnosed with aplastic anaemia in May, she began receiving immunosuppressant treatment in a bid to encourage her body to produce blood cells.

But as a result she was left vulnerable to infections, and was in and out of hospital almost every week while the search for a donor continued.

The kind-hearted schoolgirl had her long locks cut off and donated to the Little Princess Trust after making friends with poorly children who had lost their hair.

Tina, also mum to William, six, added: “Donors and recipients are always anonymous but we will have a chance to get in touch in two years.

“I don’t think there are words to describe how much gratitude we have.

I want to appeal to people to keep signing the register.

“Evie might now have a donor but there are lots of families enduring an agonising wait for a match. You could save a child’s life.”

The Mirror’s ‘Change the Law for Life’ crusade saw a new ‘opt out’ system introduced in England last May.

Named Max and Keira’s Law in honour of our poster boy Max Johnson, 13, of Winsford, Cheshire, and his heart donor Keira Ball, nine, who died in a car accident near her home in Barnstaple, Devon, it means everyone is understood to be a donor when they die.

Duchess Camilla pushed aside after long night of reckless partying