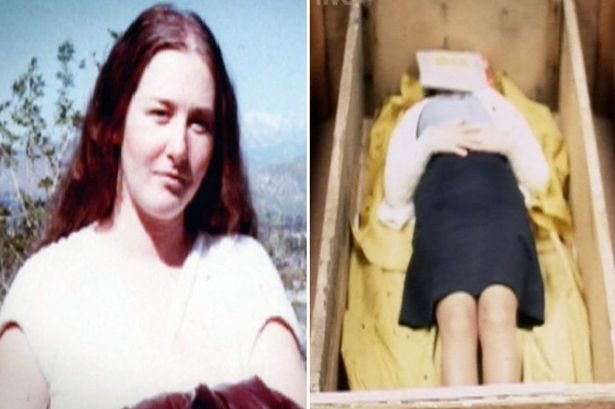 Colleen Stan was an experienced hitchhiker and thought nothing of hailing a ride to a friend’s birthday party.

Aged 20, she wasn’t in the least worried when a happy young couple with a baby pulled over and offered her a lift.

But unbeknown to Colleen, the husband Cameron Hooker, 23, was on the prowl for a ‘slave’ to imprison, rape and torture – and Colleen was it.

But sat in the back of the car, Colleen soon began to feel uneasy. And when Hooker stopped to let her use the toilet at a service station, everything in her body told her to escape

“A voice told me to run and jump out a window and never look back,” she told People Magazine of that fateful meeting on May 19, 1977.

She had spotted a strange box on the seat next to her with a hole in one side and would later learn that it was a ‘head box’.

It had been chillingly designed specially by lumber mill worker Hooker and lined with sound-proofing to keep her quiet after he pulled onto a dirt track and bound and gagged her before locking her head inside.

Terrified, she was driven 300 miles from Eugene, Oregon, to the couple’s home Red Bluff, California, where Hooker suspended her from the rafters of the basement with chains before sexually assaulting her and having sex with Janice beneath her in ‘celebration’.

“I was terrified,” Colleen told Closer. “Janice watched as Cameron tortured me and then they had sex in front of me. I was convinced they were going to kill me.”

Her ordeal was retold in the film The Girl In The Box, revealing how she was caged in a box for 23 hours a day and only let out to be raped, tortured, beaten, electrocuted or stretched on a rack.

Hooker built her a coffin-like box that slid under their waterbed. Alone in the dark with little room to move, Colleen was starved, deprived of water and forced to endure temperatures of up to 38C in summer.

He brainwashed her into believing he worked for an organisation called ‘The Company’, which would kill both Colleen and her family if she escaped.

It was only when she agreed to sign a ‘slave contract’ that she was allowed out of the box more often to care for the children and help out around the house.

After three years, Hooker bizarrely took Colleen to see her parents, but by then she was so scared of ‘The Company’ that she passed her captor off as her doting boyfriend.

But Hooker’s control began to unravel when he made Colleen his second wife, and a furious Janice told her ‘The Company’ wasn’t real.

According to Janice, Hooker had also sexually assaulted and tortured her from the moment they met when she was 15 and had only agreed to stop if she would allow him to find a ‘slave’.

It was Janice who eventually set Colleen free, dropping her at a bus station before fleeing with her children in 1984.

Colleen did not go to the police and maintained contact with Hooker, who she hoped would ‘reform’. But Janice reported him three months later and was granted immunity in return for her testimony.

Colleen, now 62, has struggled to move on and suffered a series of failed marriages.

She went on to get an accountancy degree and refuses to allow herself to be defined by her ordeal.

“Your life is just in limbo when you’re in captivity,” she said. “Once you get that freedom back and you have that choice again, it’s just like the gates open… And you just run for it.

“I have to accept the fact that it happened because it did. I don’t let it affect my life now because to me, it’s over.”