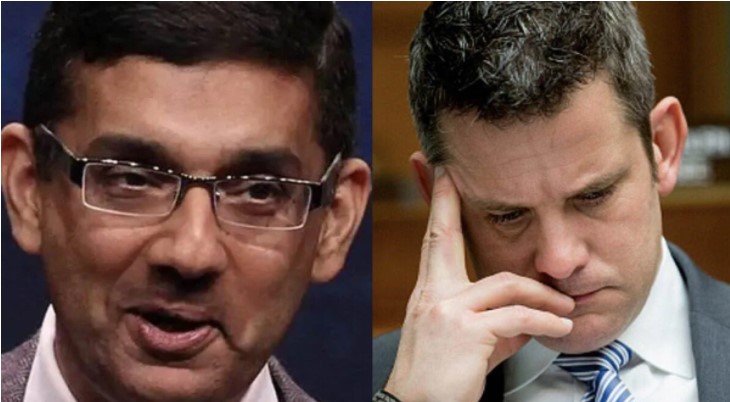 Dinesh just took Adam Kinzinger and put him through a political meatgrinder. There is nobody more insufferable than the GOP RINO from Illinois, Adam Kinzinger.

This man is so utterly clueless, you have to wonder if he’s really this dumb and out of touch, or if he’s just a parody account, trolling all of us.

Kinzinger has never been a “fan” of Trump, and he was always a snarky, underhanded jerk while President Trump was in office, but Kinzinger really kicked his Trump-hate into high gear when Trump was forced out of office.

This guy came flying out of the closet as a gigantic, mentally deranged liberal Trump-hater – loud and proud! He joined up with lunatic Liz Cheney on the “S.S. RINO” and tried to “sink” the American First movement.

It was a sad display of cluelessness, and the two have utterly failed; as Liz is about to lose her leadership positions and become virtually irrelevant in the party while she waits to be primaried in her home state of Wyoming.

The same thing is going to happen to Kinzinger as well because he can’t keep his globalist yap shut. Now, Kinzinger is claiming that the GOP is the “Titanic” thanks to Trump, and we’re slowly sinking to the bottom of the ocean.

What is this guy smoking?

Does this goofy clown actually believe the party of “Paul Ryan” and “Mitt Romney” is the future? You don’t know if you want to laugh or cry at such stupidity.

So, he conducted an online poll, asking what’s more like the “Titanic…” Adam’s career or Trump — and the results thus far speak for themselves…

These are the standings thus far in the poll with about 6200 votes in and 22 hours left.

You can vote here! Let your voices be heard and send a message to that dopey loser Adam Kinzinger:

We have to make sure that we go beyond the online laughs and polls, and primary everyone one these RINOS because we can’t beat the Dems until we get rid of this cancer in our own party. And together, we can do this.

Stay focused and get involved in your local politics, even if that just means speaking out and holding your local reps and senators accountable on everything.

If you can do more, and actually show up at meetings or run for an office – any office –  please do it. If we all make these efforts, we can facilitate the changes necessary in order to get this party back on track.