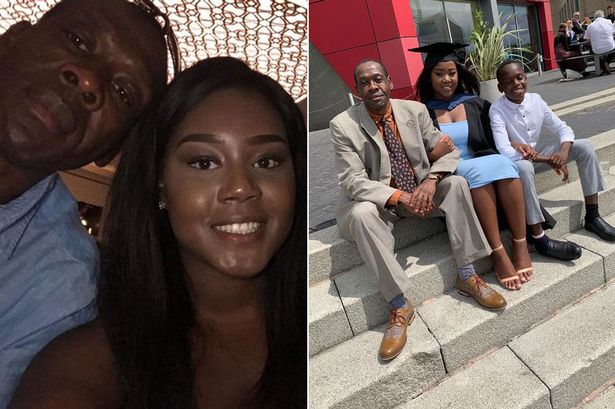 A daughter has told of the heartbreaking last moments she spent with her dad before he died of Covid-19.

Kenneth Musinguzi, 51, passed away on November 15 after contracting the virus.

He had diabetes that was diet controlled and high blood pressure but there was “no indication” that he would get so seriously ill, his daughter Glenda said.

Before he fell ill, the social worker was fit and healthy, Manchester Evening News reports.

But earlier this month Kenneth, from Bury, Greater Manchester, got seriously ill with Covid-19 and spent ten days in an induced coma battling the virus at Royal Bolton Hospital.

A consultant then brought in the family to tell them there was nothing more they could do.

The dad, who moved to the UK from Uganda when he was a teen, had deteriorated rapidly after saying he was struggling to breathe on November 5.

He was taken into Royal Bolton Hospital that day and on November 6, the decision was made to put him in an induced coma.

Glenda, who described her dad as her “hero” who was the “bravest person” she knew, said: “I spoke to my Dad at 2pm and again around 6pm over the phone and both times he told me that he was struggling to breathe and needed to get off the phone.”

Over the next few days his lungs were inflamed, his kidneys began to fail and he was put on dialysis, according to the M.E.N.

The family were told he had stopped breathing for 11 minutes and doctors had given him adrenaline for two cardiac arrests.

The consultant described what had happened as Kenneth “trying to die” and she had said he was on the verge of having another arrest, Glenda said.

Kenneth’s teenage son George was waiting downstairs with his auntie Philo while Glenda and her mum went into the ward, she said.

“He looked so ill, so weak, so tired – but he was still fighting. It truly felt like he had waited for us,” Glenda said.

“We stroked his face and caressed his hand. We told him we loved him a million times.”

The 24-year-old added: “We told him we still needed him and to keep fighting for us. We told him his son was downstairs and we needed to give him good news.

“We told him this was the last push and if the doctors saw any small improvements, they would keep him with us.”

Kenneth was then put on 100pc ventilation, but his oxygen saturation levels were 40pc.

The consultant said that if he survived, Kenneth would have brain damage due to the lack of oxygen that could reach his brain.

Glenda said: “Regardless mum and I wanted to keep the machines on but the consultant said we were ‘prolonging the inevitable’ because dad was getting worse and worse.

“Mum and I sobbed like babies. I remember looking outside, the sky was so dark, and the rain was so heavy.

“We called family and asked them to pray for dad and us whilst we spent our final hours with him.

“When we re-entered the ward, dad was still waiting for us. He had started to sweat on his face and his right eye began to tear.

“Mum and I both had our moments with him. I told my dad how proud I was of him, how much of an inspiration he has been for me.

“I told him I wanted him to be with me in every decision I make no matter how big or small. I told him I too would work as hard as he has fought in everything I do in life.

“I told him I want to feel his presence and I want to see him in my dreams. I played old voice recordings of George’s voice.

“I made promises on behalf of my brother and said everything I thought my brother would say to my dad at this moment.”

In his final moments, the ICU unit arranged for the family to have a Church of England priest pray for Kenneth.

“We sang gospel songs to him. And then around 11.11am the nurse started to slowly switch machines off,” Glenda said.

“I remember the moment where my eyes were closed but all I could see was light. Outside the rain had completely stopped and the sky was clear.

“I personally feel like that was my dad spirit reassuring us that he had heard us and that he was okay. He passed away minutes later at 11.24am.”

Meghan Markle essay ‘penned by one of her obedient aides’: Haters target Duchess of Sussex

Man, 20, ‘raped teen girl and took nude photos of her while living under her bed’