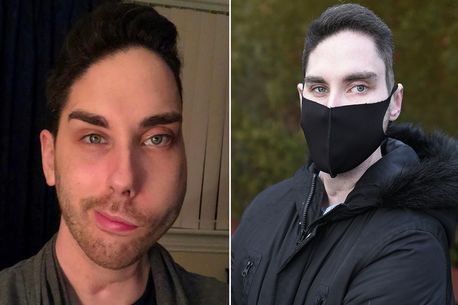 A man born with a life-changing facial disfigurement has said he is “dreading” the day face masks are no longer compulsory.

Waiter Atholl Mills was diagnosed with rare cystic hygroma at birth – a condition where the lymph nodes swell.

Surgeons removed some cysts but a cut to a left sided nerve resulted in him developing facial palsy – a condition that causes a permanent weakness or paralysis.

Now, the Daily Record reports, he is dreading the day when masks are deemed unnecessary once again.

Atholl, of Eyemouth in the Scottish Borders, said: “My condition affects my head, ear, neck and jaw on the left side of my face. I‘ve noticed a massive difference since we started wearing masks.

“People who used to stare at me in work don’t stare now and I’ve not had one comment since July.

“I work in a busy garden centre and this time last year I was getting comments every week from people.

“Once a guy told me that if he looked like me he would probably kill himself.

“I used to feel anxious approaching a table with kids because children are inquisitive and ask questions. Now kids just chat away to me. It’s been really nice.”

He went on to say that he now worries about when masks will again come off and “if people are going to start commenting again”.

He added: “I don’t know if I’ll be prepared to deal with that because I’ve got used to people saying nothing.

“I’m hoping people remember that some people look different and remember to be kind.”

Atholl was unaware of his visual difference growing up until a child at school pointed it out.

He has since faced negative reactions, which at one point left him unable to leave his house.

He said: “I live in a small village so growing up people were mostly accepting.

“It was when I ventured out to the cities or towns that I would notice people staring or get comments.

“When I was young, I just thought I was like every other kid until when I was about nine this boy joined my school and said to me, ‘You don’t look like everyone else, you look different’.

“I started to become more aware of other people looking at me.

“It impacted my confidence a lot. It really got me down. There was a time when I struggled to leave the house in case people looked at me or made a bad comment.”

Last year Atholl became an ambassador for Changing Faces, a charity for everyone who has a mark, scar or condition that makes them look different, in an effort to raise awareness of visual differences.

Atholl said: “I became a campaigner for Changing Faces because I wanted to help.

“And since I started posting, I’ve had people contact me to say they liked my videos and had never seen someone like themselves before.

“So I’m glad to be raising awareness of my condition and to show others with a visible difference that they are not alone.

“People need to be educated that not everyone looks the same and that is okay.”

Changing Faces chief executive Becky Hewitt said they were ‘immensely proud of campaigners like Atholl who are speaking out and making sure that the experiences of people with disfigurements are heard throughout this pandemic.’

Mom Forces Daughter To Take Pregnancy Test With Her, But They Are Shocked At The Results