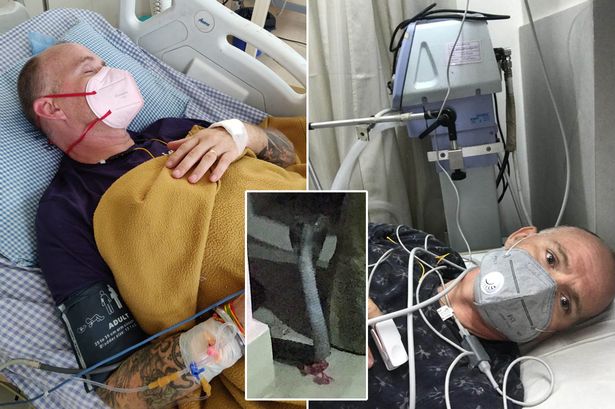 A fundraiser for the CEO of a British charity who was bitten by a venomous snake while recovering from a second bout of Covid-19 in India has reached more than £16,000.

Father-of-two Ian Jones, 49, is said to be “very frightened”, having been bitten while recovering from the deadly virus.

The charity worker from the Isle of Wight was rushed to intensive care in India after he was attacked by the deadly Indian black king cobra in the north western part of the country.

A fundraiser for married Mr Jones was launched on Friday with a goal of £8,000, but in 48 hours kind donations from all over the world reached £16,700.

His worried family say they are “deeply” grateful for the money which will help cover medical bills, future treatment, and transport home.

The former healthcare worker, from Ryde on the Isle of Wight, was bitten while relaxing at his charity Sabirian’s base in Jodhpur, Rajasthan.

His son, Seb, said that his father has already battled malaria, dengue fever but was determined to “stay in the country to help the people that needed his support”.

He added: “We were naturally concerned about him though and then when we heard he had also suffered what is usually a fatal snakebite on top of all that he had been through, we honestly could not believe it.

“It really has been touch and go.”

His family said Mr Jones is now being treated at his charity base.

They said: “Ian is thankfully no longer being incubated in hospital although he is currently completely blind and suffering from paralysis in his legs.

“The doctors hope this may be temporary but we have no guarantees that this might be the case and he is obviously very frightened by his condition.

“He left intensive care and was due to be transferred to a general Covid ward within the hospital, however these wards are extremely busy.

“His condition is still very serious and we are naturally very concerned about him.

“We want to reiterate our thanks to everyone for their generosity and support.

“This will help Ian enormously as we continue to pay the medical bills that have already accumulated and as we investigate the cost of any further treatment and transport home.”

Colleague Mike Bulpitt said: “Ian has put so much on the line to continue to support the people out in India that he works with, living in difficult conditions and being away from his own family and friends on the island for most of the year.

“He is now facing a long road to recovery and we are appealing for any fundraising support people can give to help us meet his medical costs, until he can eventually be brought home.

“We hope that he will soon be able to get back to the work he loves and to supporting those that need him, but right now he needs all our help to get through this battle to survive.”

King cobras – which can grow to four metres in length – are highly venomous and dangerous snakes, especially when agitated, and kill thousands of people in India every year.

There’s one Thanksgiving dish that’s dangerous, throw it out

Did a Demon Appear at Biden’s Speech?

Luxury At Home With Pools and Spa