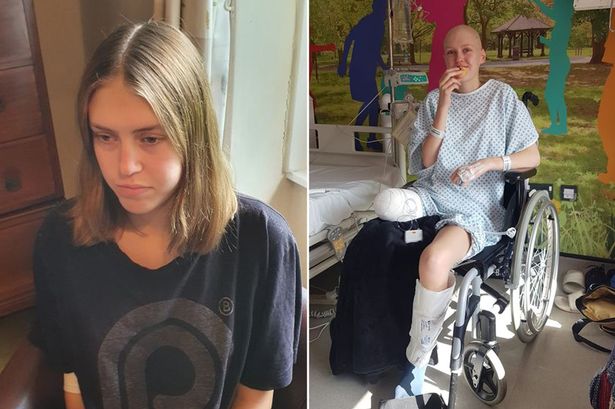 A teenager girl about fifteen years old in Cardiff capital of Wales suddenly suffering from the tragic disease.  It is not a common disease. Firstly, she neglected and suppose it would be fine. But with the passage of time it spread to her leg and finally she was diagnosed with osteosarcoma, a bone cancer which affects just 150 people a year.

Ayla Halewood has a rare form of bone cancer, causing her to have most of her right leg amputated, but it spread to her lungs. Her family want to make her last few years memorable.

Stepmother Sarah Hilary-Jones said “the family is amazed by the schoolgirl’s strength”.

Alya 15, first started complaining about pain in her right knee in April but the family initially put it down to growing pains, according to Daily star.

She had consulted with their GP, she was referred to Noah’s Ark Children’s Hospital for scan and it also known as for it specialist care. The hospital situated in Cardiff near to her abode.

The family were told about Ayla’s devastating condition.

Sarah said: “It was like the floor went from beneath our feet. It was so shocking that you can’t really believe or digest what you’re being told.

“Everyone just went silent and didn’t know what to say. Ayla had never had anything wrong with her before.”

The tragic teenager was diagnosed with osteosarcoma, a bone cancer which affects just 150 people a year.

She began chemotherapy to fight the deadly disease, but it failed to shrink the tumour and in September she was forced to go under the knife for a right leg amputation above the right knee.

Sarah said the devastating diagnosis has had a positive impact on Ayla’s character.

She said: “Before all of this she would admit that she wasn’t very confident, was quite shy, and got embarrassed about things.

“But now she’s raring to go and wants to attack life and enjoy and experience everything she can.”