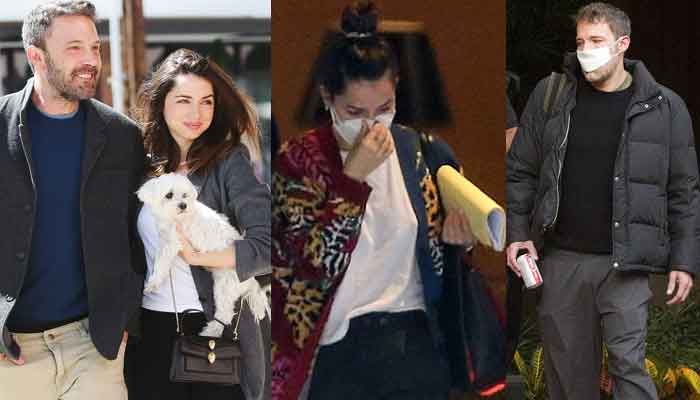 Ben Affleck and her girlfriend Ana de Armas looked fresh as the Hollywood stars appeared together in New Orleans to film  new scenes for their upcoming thriller ‘Deep Water’.

Affleck, 48, and de Armas, 32, have resumed shooting for their new psychological film in Lousiana. The couple delighted fans as they were spotted together while leaving a posh hotel early in the morning on Sunday.

Sporing a kids-sized face mask, Affleck captured the attention as he cut a casual figure. The actor donned loose charcoal grey sweats, a downy jacket and dark sweater for the drive.

On the other hand, Ana de Armas went for chic and casual, wearing a red and animal print cardigan over a white tee shirt and jeans.

Previously, the lovebirds were  photographed while  sharing romantic moments on a balcony. Ana de Armas was looking gorgeous in chic outfit. The couple  sparked a romance rumour as the actress was seen wearing a diamond ring on her left ring finger.

The ring, according to a media outlet,  was a piece of costume jewelry from the movie the couple is currently filming together, in which they play a married couple.

Ben Affleck and Ana de Armas,  who met in 2019 while working on the Adrian Lyne directed movie, have been romantically linked since early March, when they were seen on a trip to her native Cuba. Then, they headed to Costa Rica for a romantic vacation before returning to Los Angeles.

The Real Reason the Poop Sweats Take You From 0 to Emergency in, Like 10 Seconds