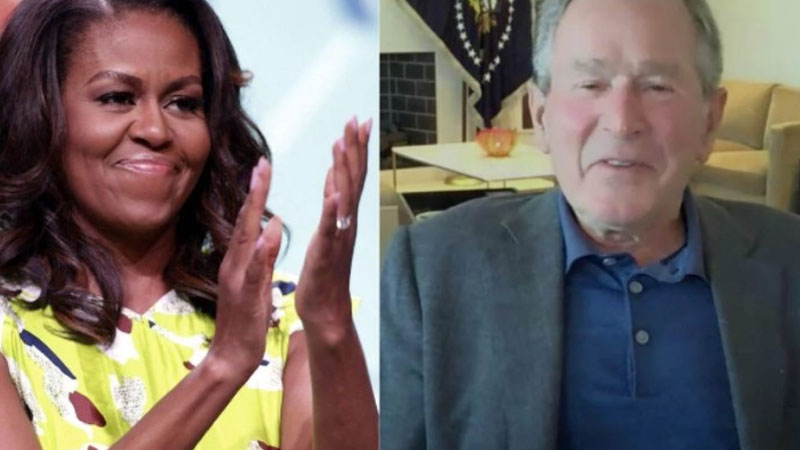 While appearing on “Jimmy Kimmel Live!” on Wednesday night, George W. Bush opened up about his friendship with former First Lady Michelle Obama.

Bush and Obama made headlines back in 2018, when he was seen passing her a mint at the funeral of Senator John McCain (R-AZ). The same thing happened the next year at the funeral of his father, former President George H.W. Bush.

“I get a little antsy during the long-winded eulogies, and so I start cracking a few jokes,” he added. “And she seems to think they’re funny, so I’m delighted.”

While Bush admitted that he does not have Obama’s cellphone numbers, he also said that their friendship is stronger than the one their spouses have with each other.

“He doesn’t sit next to her at the funerals,” he said laughingly of his wife, Laura Bush, and Obama’s husband, former President Barack Obama.

Entertainment Tonight reported that Bush recently said in another interview that he was initially “shocked” by the reaction his friendship with Obama got back in 2018.

“It shocked me,” Bush said of the reaction by the public. “We got in the car and I think Barbara or Jenna said, ‘Hey, you’re trending!’ The American people were so surprised that Michelle Obama and I could be friends.”

Obama has also discussed Bush giving her a mint at his father’s funeral.

“He has the presence of mind and the sense of humor to bring me a mint,” Obama said, according to ABC7. “And he made it a point to give me that mint right then and there, and that’s the beauty of George Bush.”

Obama explained back in 2019 that her “values are the same” as Bush’s, despite the fact that they have political differences.

“We disagreed on policy, but we don’t disagree on humanity. We don’t disagree about love and compassion,” Obama said. “I think that’s true for all of us, it’s just that we get lost in our fear of what’s different.”

I Am Not Ready to Reenter White Society