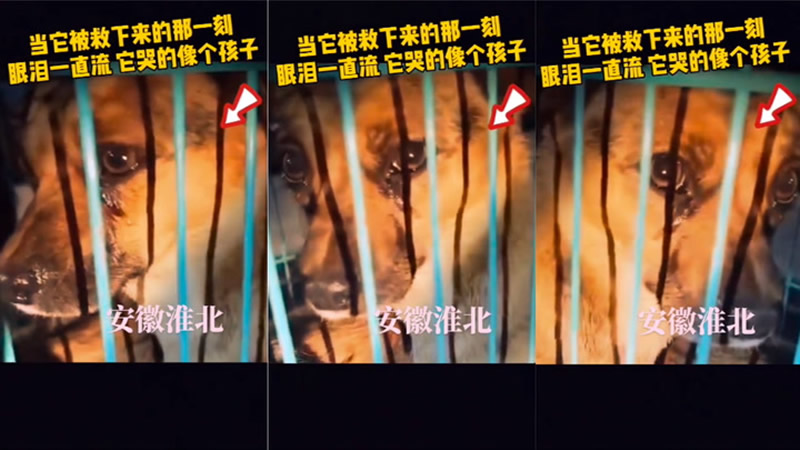 Cassie the dachshund was tortured and forced to have ‘litter and litter’ before being sold to a butcher. Christine Barker rescued the pup as she was about to be slaughtered

A tortured dachshund about to be slaughtered in a Chinese meat market has been saved by a loving family.

Cassie was about to be “slaughtered, skinned and skewered” when she was rescued by Christine Barker, 61.The heavily-scarred pup now lives with her new owner, her husband and their two other miniature dachshunds, Rodney and Denzel.

Christine, of North Shields, Tyne and Wear, told ChronicleLive: “All Cassie has ever known is abuse and being forced to have puppies.

“She’s only about two-years-old, but she was forced to have litter after litter and then she was sold to a butcher.

“When she arrived at our home she was a bit timid and scared, but when we enticed her out of her carrier with some food she started to settle in immediately.

“She finished her food and went straight over to my husband Kevin and rolled onto her back for a stroke, it was almost like she was thanking us for rescuing her.”

Cassie arrived at Christine’s home on Sunday following a journey of over 15,000 miles.

She flew from Beijing to Kuala Lumpur then on to Heathrow airport, where she was boarded overnight before she was brought to the North East by pet carrier.

Now she is enjoying her life with her new adoptive family and their two other miniature dachshunds, Rodney and Denzel.

She was one of around 20 dachshunds to be rescued from China and Korea by the Dog Meat Trade (DMT) Dachshund Support Group, based in Cramlington.

Christine said: “A lot of Chinese people have dogs, love dogs and care for their dogs, but on the meat markets they’re just viewed as food.

“They’re bundled up into a cage and people go along and choose a dog, then they’re skinned, butchered and put in a bag.”

The online group has over 4000 members and was launched a year ago by Lesley Scott who rescued her dachshund Grace from a meat truck in August 2018.

The group’s aim is to rescue as many dachshunds as possible from the dog meat trade and they use regular fundraising and contacts with dog rescue organisations in China and Korea to make this happen.

All rescued dachshunds receive veterinary treatment and vaccines before they are brought to the UK on a flight costing approximately £2500 due to covid restrictions.