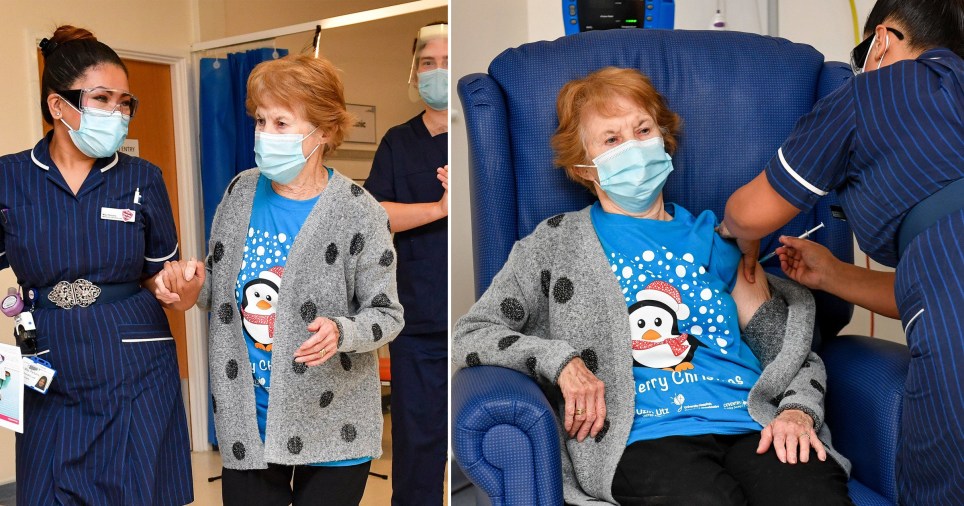 A 90-year-old grandmother has made history as the first patient to be given the Pfizer/BioNtech vaccine in the UK – as she urged as many Brits as possible to get the jab.

Margaret Keenan, who has lived in Coventry for 60 years but is originally from Eniniskillen, Northern Ireland, was given the vaccine by nurse May Parsons at the city’s University Hospital at 6.30am today, Tuesday.

There is light at the end of the tunnel after the UK became the first country in the world to approve the vaccine last week.

The NHS has been on standby to rollout the biggest vaccination programme in decades as batches of the medicine arrived in lorries from Europe over the weekend.

Health Secretary Matt Hancock dubbed December 8 as V-Day as people aged 80 and over and care home workers will be given the vaccine for the first time.

Mrs Keenan, who will be 91 next week, said the vaccine was “the best early birthday present”.

Wearing a blue penguin shirt and a grey cardigan, the grandmother entered the history books as the first Brit to be given the heralded vaccination.

The retired jewellery shop assistant added: “I can’t thank May and the NHS staff enough who have looked after me tremendously.

“My advice to anyone offered the vaccine is to take it – if I can have it at 90 then you can have it too.”

Mrs Keenan will return for a second jab in three weeks time, as this particular vaccine requires two doses.

Hubs across the UK will vaccinate the over-80s as the programme aims to protect the most vulnerable first, and then return life to normal.

The government has secured 40 million doses of the vaccine, which needs to be refrigerated at -70C. Studies have shown the Pfizer/BioNTech jab is 95% effective in preventing COVID-19 and works in all age groups.

NHS England medical director Stephen Powis said on Sunday that the rollout of the vital jab “feels like the beginning of the end”, but warned Brits it will be a “marathon, not a sprint” back to normality.

Boris Johnson called the approval of the vaccine a “momentous step” in the fight against Covid-19.

He added: “But we still have some way to go and everyone needs to keep following the rules to keep the virus under control.”

It is thought that the UK could have up to four million doses of the jab by the end of December, with repots of 80,000 arriving in the first batch.

The UK has had nine than 61,000 deaths related to the virus with more than 1.5 million fatalities globally.

High Heels can be a Pain in The Feet

Smoking Side Effects for Women