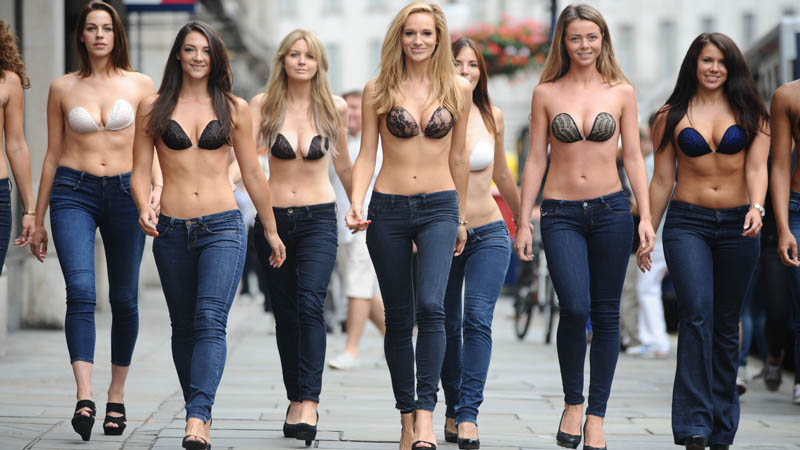 While London’s busy Regent Street certainly sees a colourful cross-section of life in the capital, it is doubtful it has ever seen anything quite like this. Shoppers today were treated to the sight of 10 women striding down the street wearing blue jeans, high heels… and very little else.

The stunt was part of the promotion of InvisiBra: a new strapless, backless bra that all the women were wearing to maintain their dignity. The bra claims to be a backless, strapless, self-adhesive bra that will lift and enhance cleavage but won’t slip off.

It also aims to bring an element of fashion into the strapless bra market, with the Invisibra coming in a range of colours and fabrics rather than the traditional ‘nude’ shade.

The silicone InvisiBra is priced at £48 while the less padded Fabric InvisiBras cost £38. Unsurprisingly rather shocked tourists stopped and openly stared at the scene as the girls flaunted their bodies.

A few rather cheeky builders who couldn’t believe their luck could be seen snapping away on their camera phones as the girls posed for the waiting press. They managed to maintain a smile despite the rather inclement weather in London today and, despite some rather extensive bouncy walking, there were no ‘wardrobe malfunctions’, giving sway to the InvisiBra’s claims.