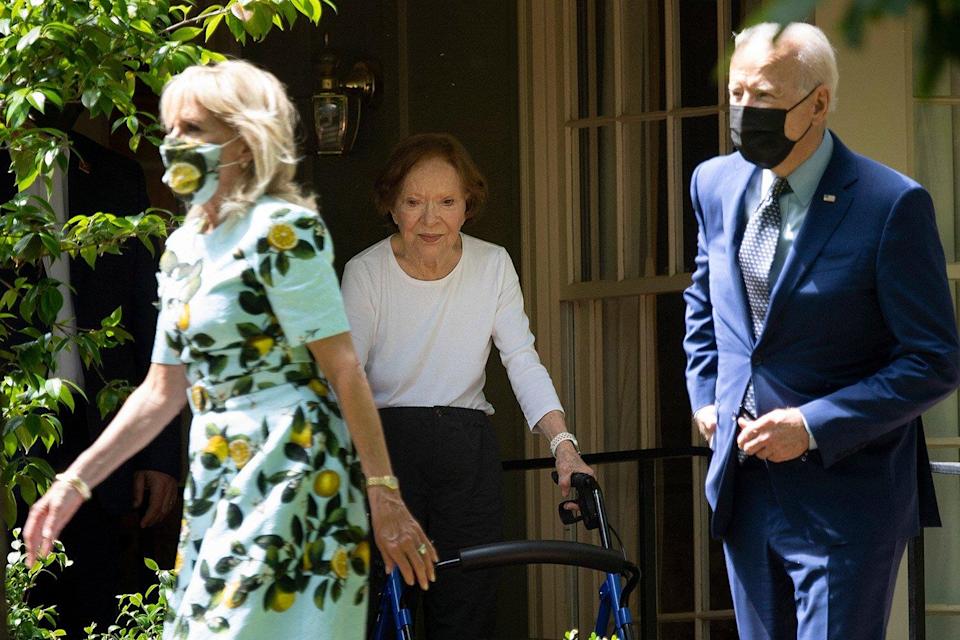 President Joe Biden and First Lady Dr. Jill Biden made a very special stop while they were in Georgia for a rally to mark his first 100 days in office — they visited former President Jimmy Carter and former First Lady Rosalynn Carter. It was The Carter Center’s Twitter feed that tipped everyone off to the photo that stopped the internet.

“We’re pleased to share this wonderful photo from the @POTUS and @FLOTUS visit to see the Carters in Plains, Ga.! Thank you President and Mrs. Biden,” the caption reads. Now it’s the photo itself that has everyone questioning the size of the U.S. political figures — why are the Bidens giants next to the Carters? The proportions are so out of whack that it had us doing a double-take when we saw the sweet photo.

“Why do The Carter’s look like miniatures?!,” tweeted one user. Another social media account chimed in, “These four are adorable but this is a perfect example why to avoid photographing portraits with a super wide lens. Anything on the edges will appear huge due to lens distortion. Must have been a very small room and no other option.”

The good news is that everyone is normal-sized in real life and the Carters were not squished by the Bidens during their hour-long meeting. President Biden shared an anecdote with the press after he left their house.

“It was great to see President Carter,” Biden said, via People. “He reminded me that I was the first person to endorse him outside of Georgia. And we sat and talked about the old days.”

President Carter is now 96 years of age and the oldest living former president of the United States. He’s been married to Rosalynn, 93, for 74 years, which also makes them the longest-married presidential couple — they are true national treasures.

President Biden was also happy to see that the former president was in good health after enduring brain cancer and surgery along with several falls over the last few years. “His health has gotten better,” Biden summed up, “It’s amazing. He keeps bouncing back.”

What is This Terrifying Bug in Your House Called? Don’t Kill It