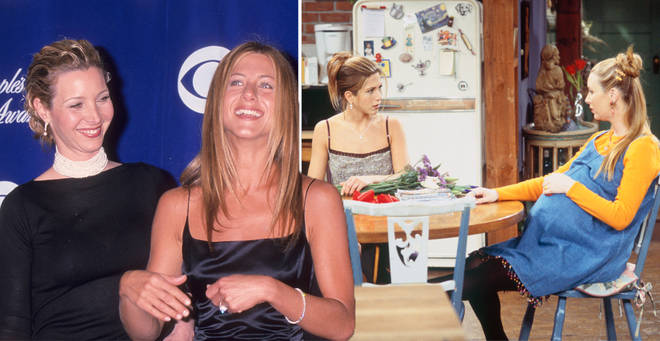 Lisa Kudrow recently shared an interesting tidbit about her 23-year-old son Julian Murray Stern while talking about Friends with good pal Conan O’Brien on his talk show Conan. Apparently, Julian used to be obsessed with Lisa’s Friends co-star and close friend Jennifer Aniston and we can’t really blame him for liking America’s eternal sweetheart. Kudrow confessed that she knew her son hasn’t seen every episode of her iconic sitcom.

Lisa also knew for a while that in Julian’s school, people were watching it and hence, her son felt like he had to watch Friends as well so that he could “participate in what everyone else was watching.” The 57-year-old actress also acknowledged that her son really thought “that everybody else was very funny on the show. [chuckles] And then he… [Conan quipped, “That’s a classic kid.

Just like, ‘Everyone else is funny.’ That’s classic.”] And that is true for all of us. Well, I’m not sure. I can’t, I don’t know. But I know that he would say, ‘But, and you’re funny too.’ Like, ‘Thanks!'” About Julian liking Jennifer, Lisa disclosed, “[Conan said, “I know that he really was obsessed with Jen.”] He’d fly into her lap. Well, she’s a lovebug and that made sense.”

Giving Conan a TMI, Kudrow revealed, “And I was always glad for anyone that Julian felt love for and felt from. But then at home, she’d be on TV, and he’d go, ‘Mommy!’ [chuckles] [Conan quipped, “That’s got to be a little scarring, maybe?”] I guess I remember it for a reason, not scarring but just sort of… I’m kind of analytical, so I’m like, ‘Is this wishful thinking or do they have some kind of higher soul connection that I don’t have with him?’ [laughs] I’m happy for both of them.'”

We wonder what Julian thinks about his mom’s TMI confession on a talk show!

However, Lisa also mentioned something “true and nice” about her son; how Julian was in attendance at Friends Reunion, which took place at Friends’ soundstage, Stage 24 of the Warner Bros. Studio lot in Burbank, California, and that after the taping, Julian confided in his mom that he was “really proud” of her.