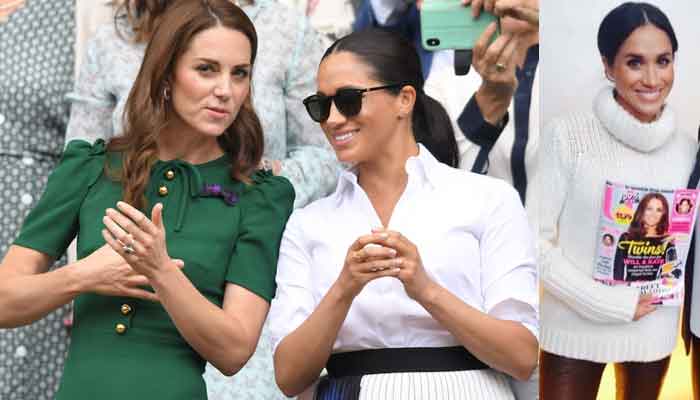 Meghan Markle has came under fire once again after a photograph of her holding an image of Kate Middleton, the Duchess of Cambridge, resurfaced from the time before she met Prince Harry.

The picture, circulating on social media, shows the Duchess of Sussex standing beside a friend and holding a magazine the features a main image of Kate Middleton.

The picture seemingly shows as Meghan was a huge fan of Kate and she took an inspiration from her to join the UK’s royal family.

However, what has attracted royal fans is the fact the image was taken two years before the former Suits star met her future husband, Prince Harry.

In the viral image, Prince Harry’s sweetheart is seen holding a copy of Irish U Magazine and standing beside deputy editor Denise Cash.

The Duchess of Sussex is being mocked by social media users since the image went viral. Now GB News presenter Dan Wootton has posted the image on his Twitter account.

He mocked the image with an emoji of three sneering cats.

The post drew a wealth of subsequent sneers from his Twitter followers who support the Duchess of Cambridge and see Meghan as “deep down being Kate’s fan”.

The snap was captured a few years before Meghan began dating Prince Harry in 2016.

The two famous women have since ‘fallen out’ with Meghan claiming that Kate made her cry over bridesmaids dresses for her wedding in her explosive Oprah interview.