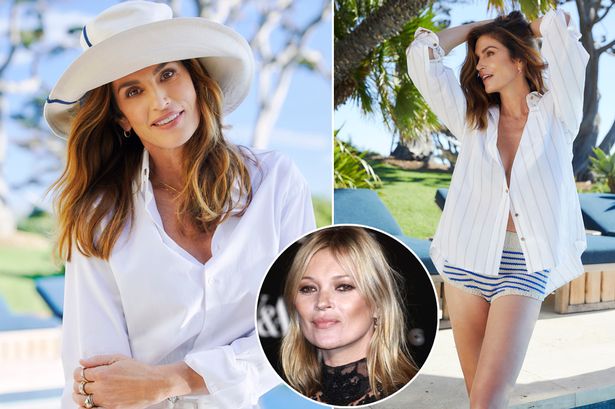 Cindy Crawford has spoken out about an unofficial runway rivalry with fellow supermodel Kate Moss, when the pair were at the peak of their powers.

The 54-year-old supermodel said that, as a young woman, she was never able to eat what she wanted and still fit into the clothes she had to wear at fashion shows.

Meanwhile, she would get jealous of seeing Kate Moss eating junk food and smoking cigarettes while still managing to stay in shape.

Nowadays, Cindy says she has scrapped trying to diet and now chooses to eat well instead.

Speaking to Red magazine, Cindy said: “I don’t like the word ‘diet’, but I still choose to eat well. I was never one of the people who could eat what I wanted – even I used to get annoyed when Kate Moss would be eating a burger and fries and smoking a cigarette.

“When I moved to New York, I knew I was going to have to change the way I ate or I wouldn’t be able to get into the clothes – and, by the way, the clothes were much bigger then than the sample sizes now.”

Cindy said that lifestyles have changed so much since she was young.

She continued: “But the way I’ve exercised has changed. In my 20s, I would work out hard and flop down on the couch.

“Then, I had little kids and realised my workouts couldn’t tire me any more, they actually had to energise me instead.

“Now my goal is not to get hurt. So, I have added a lot more stretching and Pilates, and I don’t feel as compelled to do those tough workouts any more.”

Cindy has graced the cover of fashion magazines including Vogue, Elle and Cosmopolitan, and said she had generally had good experiences doing nude and swimsuit shoots.

However, she picked out one with Sports Illustrated early in her career in which she felt as though she did not have a voice.