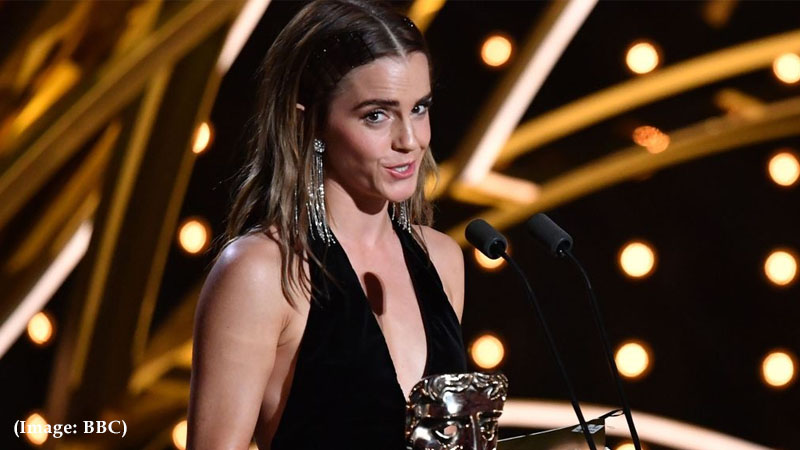 The actress, 31, who played the iconic Hermione Grainger in the film adaptions of Rowling’s best-selling books, took to the stage to present the award of Best Outstanding British Film at the Royal Albert Hall on Sunday.

After she was introduced by host Rebel Wilson, Emma appeared to make a savage dig at the best-selling author following her controversial comments on transgender women.

As Rebel, 42, welcomed Emma to the stage, the Australian actress quipped: “Here to present the next award is Emma Watson. She calls herself a feminist, but we all know she’s a witch.”

To which Emma replied: “I’m here for ALL the witches.”

Following her powerful statement, eagle-eyed BAFTA viewers flocked to Twitter to discuss what Emma’s comment meant – and whether or not it was directed towards Rowling’s controversial views.

“Ooooooh Emma Watson throwing so much shade at JK Rowling! This is the drama I needed tonight,” quipped on BAFTA viewer.

“Woah! Emma just went IN on JK Rowling,” someone else insisted.

Meanwhile, a fourth joked: “JK Rowling is somewhere shaking after that comment from Emma. What a classy woman.”

It comes as author Rowling, 56, who has been widely criticized for her controversial comments about the trans community.

The drama unfolded when Rowling publicly shared her disapproval of certain transgender terminology.

In June 2020, Rowling took to Twitter to share with her 14 million followers that she had an issue with the term ‘people who menstruate’ being used instead of ‘women.’

“I’m sure they’re used to be a word for those people. Someone help me out. Women? Wimpund? Wood?” Rowling tweeted.

Her posts were branded ‘transphobic’ by infuriated fans with JK hitting back at her critics as she insisted: “It isn’t hate to speak the truth.”

After doubling down on her statement, Rowling added that she respects ‘every trans person’s rights to live any way that feels authentic and comfortable to them.’

As the furor went on, the author then shared an essay discussing her thoughts on biological sex.

Rowling said her issues stemmed from being a survivor of abuse which gave her concerns about single-sex spaces.

“I’m mentioning these things now not in an attempt to garner sympathy, but out of solidarity with the huge numbers of women who have histories like mine, who’ve been slurred as bigots for having concerns around single-sex spaces,” she wrote.

Months later, the debate resurfaced when it was revealed that the villain in Rowling’s latest book Troubled blood, was a male serial killer who dons a woman’s coat and wig when killing his victims.

Rowling, who released the crime fiction novel under the pseudonym Robert Galbraith, came under fire from accusations of transphobia once again.

Among those weighing in on the debate were some of Harry Potter’s biggest stars.

Leading trio Daniel Radcliffe, Rupert Grint, and Emma Watson all spoke out against Rowling’s views as well as the star of Fantastic Beats franchise Eddie Redmayne.