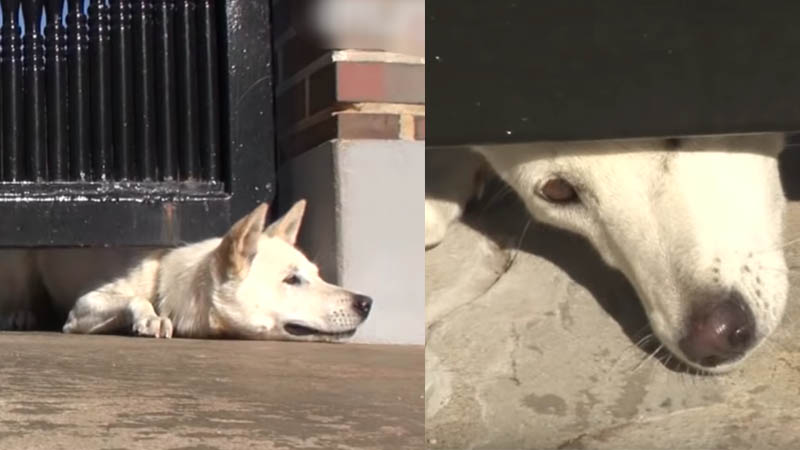 Dogs end up on their own for a number of reasons. Usually, they are lost and we do our best to reunite them with their families. One day, a dog appeared at a family’s home insistent on getting inside. She crawled beneath their backyard gate to say “hello.”

The husband thought she was quite adorable. She had a collar on but it was in bad shape. The wife wasn’t a fan of the dog and wanted her to leave. She would take her own dogs inside, afraid the strange dog would bite them. But the dog didn’t have a mean or aggressive bone in her body!

The couple figured she likely belonged to someone in the neighborhood or the neighboring town. When she would come by, the husband would continue to welcome her but the wife would get upset. She felt she was a nuisance.

The kind husband suggested they write a note to her owner and attach a camera to her so they could see where she went. That’s when a heartbreaking scenario unfolded.

When they viewed the footage they could see that everywhere the sweet dog went, she was unwelcome. People ushered her away from their property. You could hear some of the neighbors shouting at her to go away. It was terrible. All this sweet dog wanted was to be loved.

The couple asked their vet to come and see if she was healthy and if he had any advice. He came over and examined the dog. He was certain she belonged to someone because she was so well-behaved and friendly. He tells the couple that this dog is used to being pet and shown love and that is why she is so loving in return.

She crawls under their gate every day with a smile on her face. How could anyone deny her?

Finally, the wife has a change of heart. Once she watched the video of everyone shooing the dog away and hearing what the vet had to say, she felt bad for the dog. She agrees with her husband that they can hold onto the dog and care for her until her owner is found. If her owner isn’t found, they will keep her and officially adopt her.

Even though the wife was difficult at first, we are thrilled she had a change of heart. The full story is posted below. It has some silly music and graphics but there is an important underlying message: never assume anything. Love first, ask questions later!