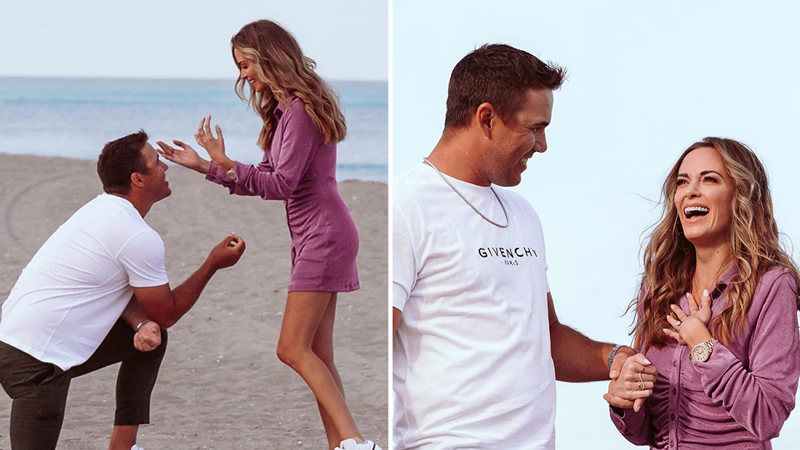 In the world of professional golf, Brooks Koepka is a bit of an icon. The four-time champion has proven his prowess on the green countless times and has amassed a sizable following of golf enthusiasts thanks to that pedigree.

While many fans may be able to quote Brooks’s best statistics and wins to you verbatim, not all are familiar with who he is when he steps off the course. So, what are the details of his personal life? Who he is married to? Keep reading to find out!

Is Brooks Koepka married? Not yet, but he does have a fiancé!
Brooks may not be officially married (yet!) but that doesn’t mean that he isn’t boo’d up to the fullest extent of the term. Indeed, the star athlete proposed to his long-time girlfriend, Jena Sims, on March 3, 2021.

The picturesque moment took place on a beach in Jupiter, FL. and Jena happily shared all the candid shots from it on her social media when she revealed their engagement on April 1, 2021.

“Forever is no joke,” she captioned the series of images from their engagement weekend, showcasing various poses of them on the beach, including Brooks on his knee asking for her hand in marriage. Beyond that, they also shared candid loved-up snaps of what appears to be a party celebrating their impending union.

Who is Jena Sims? She is actually pretty famous in her own right.
Although a lot of attention is being given to her relationship with Brooks currently, Jena is well-known for a variety of other impressive accomplishments throughout her career. Born in Georgia and an alum of Belmont University, Jena majored in international business and then went on to pursue a career in Hollywood.

She has starred in the likes of movies such as Last Vegas alongside Robert DeNiro, and Attack of the 50 Foot Cheerleader. As for television, she has been in Dexter, Entourage, and Halt and Catch Fire.

Beyond her roles on big and small screens, Jena is also an accomplished model and humanitarian. Her organization, Pageant of Hope, seeks to empower children worldwide to be the best version of themselves.

Jena and Brooks have been together since 2017 and have kept their relationship lowkey while still always supporting and loving one another. Back in 2018, Jena spoke to Golf Digest about the relationship she has with Brooks, commenting that her favorite part of it all is “being able to support Brooks and watch him because he’s so talented. It’s so much fun to watch him.”

She also added, “It’s hilarious to be standing in the galleries watching Brooks and hearing what people say about him.”

It’s clear that their years of dating have only strengthened their bond with one another, and it’s only a matter of time before the duo reveal when they’re officially going to tie the knot. As usual, stay tuned to Distractify for the latest updates as they become available.