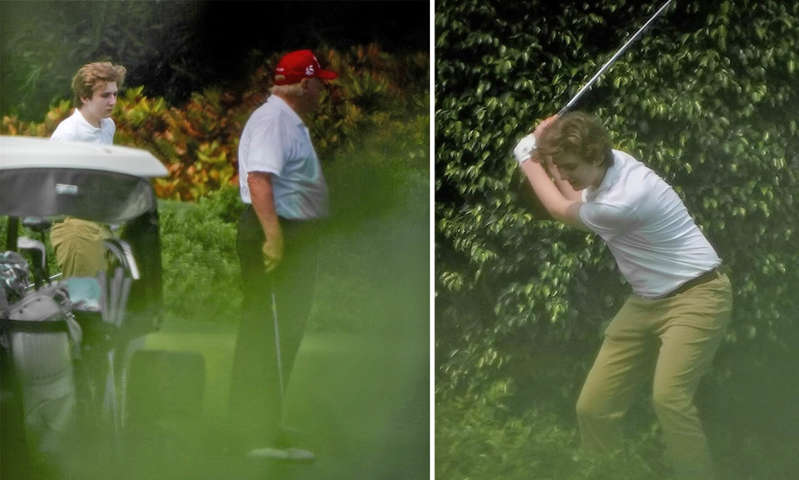 Barron Trump played Golf with Trump and a few other golfers at Trump International Golf Club, in West Palm Beach on Saturday where he showed off his talent excellently.

Like his father, he wore a white polo shirt, but he was the only one who didn’t wear Trump-branded shirt. Trump put on his signature red MAGA cap along with black trousers.

While playing, he looked cheerful and talking to fellow golf players. As we know, since January the family is avoiding limelight. He is also banned from all major platforms of social media, the Twitter, Facebook, and Instagram and only communicates through emails.

He is switched to the slogan Save America, and just like his former press secretary, he has stared endorsing Republicans. His wife Melania is inactive on social media and fled to Florida. His older child Ivanka lives in Miami with husband and kids and regularly spotted in public.

Donald Trump Jr. is aggressive and supports his father on social media. Eric is back seated to the wife Laura and Tiffny is expected to be in Florida with her new fiancé.

Joe Biden, new president also seen on Saturday playing Golf at East Coast at Wilmington Country Club in Delaware. Since he took the office, it’s his first game in 100 days in comparison with Trump who played Golf 19 times in the same period.

Tiger Woods Just Posted An Update About His Health Recovery–OMG!