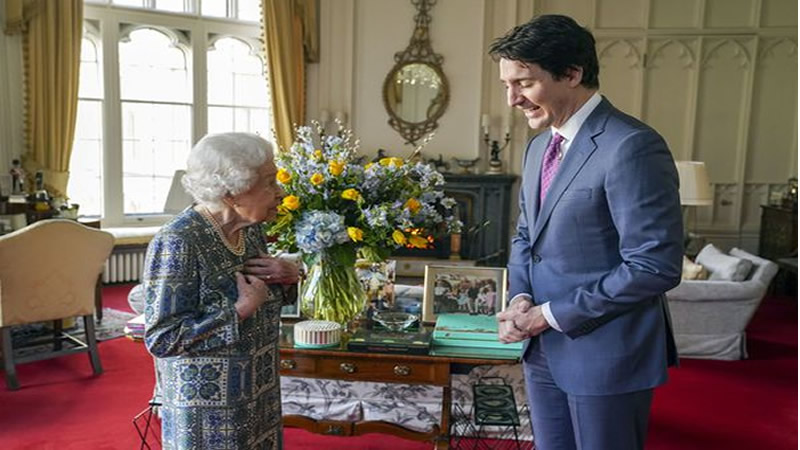 The 95-year-old monarch, who is also the queen of Canada, chatted with Trudeau after he jetted in for talks on the conflict in Ukraine with UK Prime Minister Boris Johnson and Dutch counterpart Mark Rutte.

Last week the queen donated to an appeal for funds to help Ukrainian refugees, while her eldest son and heir, Prince Charles, called the invasion “an attack on freedom”.

On Monday, the queen, wearing a patterned dress, greeted Trudeau at her Windsor Castle home, west of London, and was not seen with a walking stick she has been using.

Although visibly frailer, she appeared smiling and laughing after the pair shook hands in front of a table with a large bouquet of yellow and blue flowers — the colors of Ukraine — in what could be seen as a subtle sign of support.

Buckingham Palace announced on February 20 that the queen had tested positive for coronavirus and she was forced to cancel a series of appointments with foreign diplomats.

News that she had “mild” symptoms of Covid-19 heightened fears for her health that have lingered since she had an unscheduled overnight stay in hospital last October.

She was forced to slow down on medical advice and canceled a number of public engagements, including hosting world leaders at the UN climate change summit last November.

Her public appearances have become rarer since, and in one recent audience, she complained of mobility problems.

Prince Charles told members of the public on a royal visit last week that his mother, who turns 96 next month, was now feeling “a lot better”.

The queen is celebrating her record-breaking 70th year on the throne and has given up international travel because of her advanced age.

But she has visited Canada more than 20 times and in the 1970s met a young Trudeau when his father, Pierre, was prime minister.

She returned to public engagements last week, hosting a number of new foreign ambassadors by video link, and is due at two public events next week and later this month.

Next Monday, she is scheduled to attend the Commonwealth Service at Westminster Abbey in central London and a memorial for her late husband at the same venue on March 29.