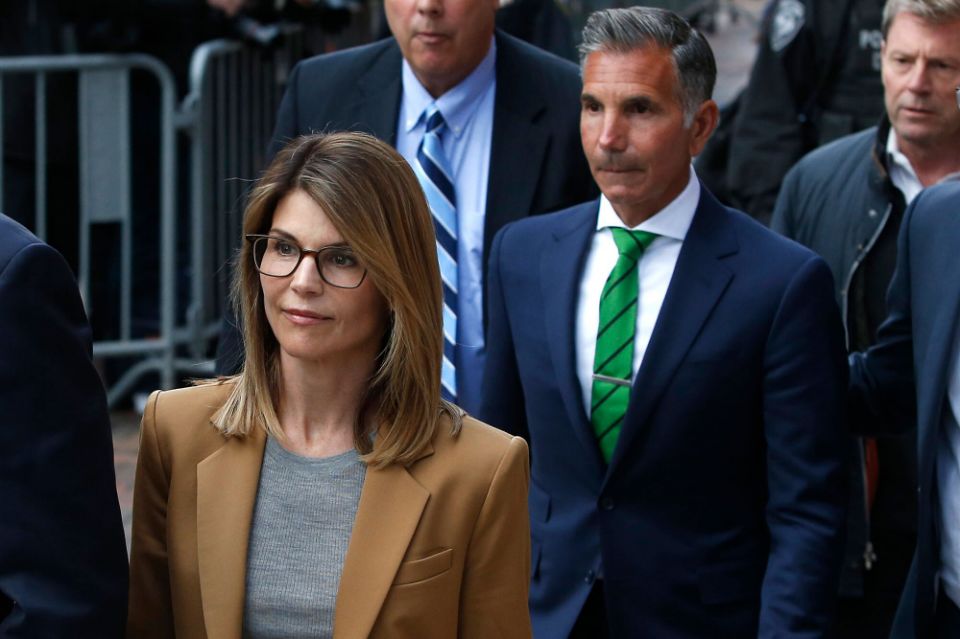 BOSTON, MA - APRIL 3: Actress Lori Loughlin, in tan at center, leaves as her husband Mossimo Giannulli, in green tie at right, follows behind her outside the John Joseph Moakley United States Courthouse in Boston on April 3, 2019. Hollywood stars Felicity Huffman and Lori Loughlin were among 13 parents scheduled to appear in federal court in Boston Wednesday for the first time since they were charged last month in a massive college admissions cheating scandal. They were among 50 people - including coaches, powerful financiers, and entrepreneurs - charged in a brazen plot in which wealthy parents allegedly schemed to bribe sports coaches at top colleges to admit their children. Many of the parents allegedly paid to have someone else take the SAT or ACT exams for their children or correct their answers, guaranteeing them high scores. (Photo by Jessica Rinaldi/The Boston Globe via Getty Images)

Mossimo Giannulli has been placed in solitary confinement for his own protection, according to multiple reports. The 57-year-old Guess designer is serving time for his role in the college admission scandal after shelling out about $500K in bribes to get daughters Olivia Jade and Bella into the University of Southern California under false pretenses.

Giannulli is being kept away from prisoners as a safety precaution amid the coronavirus pandemic, a legal source tells People. His son Gianni was the first to share the news on social media, claiming on social media in a since-deleted post that “has been locked in solitary confinement for one full month” and has been “only let out every 3 days for a few moments to shower.”

But a source tells People he’s allowed out once a day for an hour. Giannulli was booked on November 19th. As of Friday, more than 1000 cases of COVID and four cases of death were reported within the prison system he’s booked in, the Santa Barbara County system.

His wife Lori Loughlin is also serving time, and will likely be released in time to celebrate Christmas at home. Giannulli is expecting release around Easter.