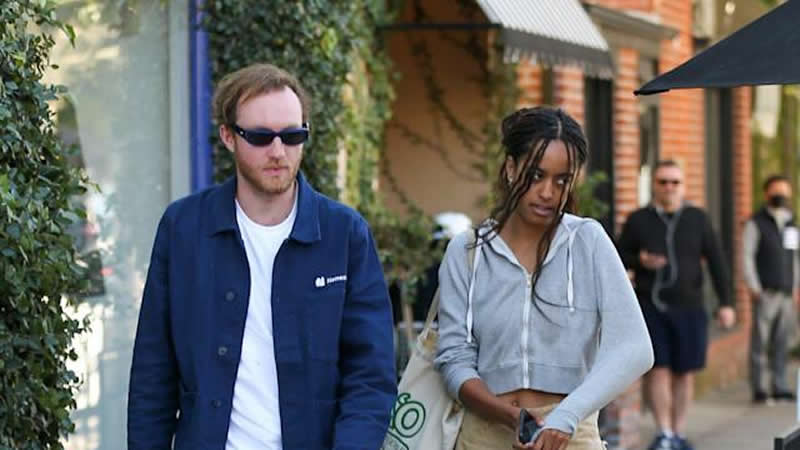 Like father, like daughter — at least in the way of Malia Obama‘s latest outfit. The former first daughter was spotted on a coffee run emulating her dad’s favorite throwback trend: khakis.

The aspiring writer was seen grabbing a cup of Joe with a friend at Alfred, a café located in Los Angeles. For the outing, Malia wore a cropped gray zip-up hoodie that she paired with a pair of oversized, baggy, distressed khakis, which were reminiscent of Barack’s go-to style staple in the early aughts.

She is accessorized with matching tan Nike sneakers accented with the brand’s classic swoosh logo in red, gold hoop earrings, and a beige tote bag from MA’O, an organic farm in Hawaii that her mother, Michelle Obama, visited in 2011 during Barack’s presidency.

Malia wore her brunette tresses in a messy ponytail, leaving out a few face-framing pieces. In 2019, Barack shared an old photograph of him and Michelle marching in the Chicago Bud Billiken parade, an annual celebration of the city’s South Side.

In the snap, Barack wore a white polo shirt and a pair of classic khakis. And while it appears he has passed down the fashion statement to his eldest daughter, he will no longer be sporting the trousers.

“Some things change — like my taste in khakis and polo shirts — but Bud Billiken endures,” he joked in his Instagram caption. “For 90 years, the Bud Billiken parade has brought people together to celebrate the rich history and culture of Chicago’s South Side.”