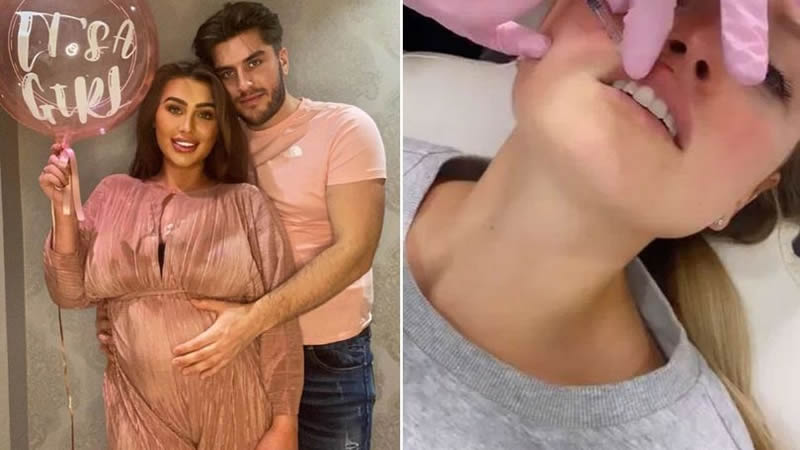 The Former Towie star is expecting her first child with Charles Drury.

Lauren Goodger has revealed she has returned to work after her beauty salon opened its doors after lockdown.

The 34-year-old, who is eight months pregnant, runs business LG Aesthetics London and has missed supporting her clients’ cosmeti needs over the last few months.

While she’s been unable to work at the salon, Lauren has been busy at home completing a micro-blading course and an aesthetics course at Cosmetic Couture before meeting clients in the flesh once again.

Discussing her decision to return to work Lauren said: “A girl that I know said ‘Why don’t you come in my salon and do an odd day here and there now things have opened up again?’

“Me being an absolute lunatic I’ve decided to get back into doing fillers while I’m 31 weeks pregnant.”

“I’ve set up a booking system and then I did another course this week to learn more about it,” she continued.

“I’ve had quite a few clients already and I’m enjoying it. I must be mad!”

The reality star recently admitted that her midwife told her to “slow down” during the last part of her pregnancy in order to protect the health of her unborn child.

The star is expecting her first child in July with boyfriend Charles Drury, 23, and says that a midwife recently told her that the baby “has stopped growing a tiny bit.”

Writing in her OK! column, she penned: “[It] sounds scary, but her growth will speed up as the weeks go on my little girl is bang on the middle of a normal weight at the moment.”

“The midwife asked me what I’ve been up to and I told her about re-starting my aesthetics business and she said this is the time where I should be slowing down and not taking on something new,” she continued.

Lauren has been working at her salon, which offers aesthetic treatments like lip fillers, and has been photographed performing procedures on customers.