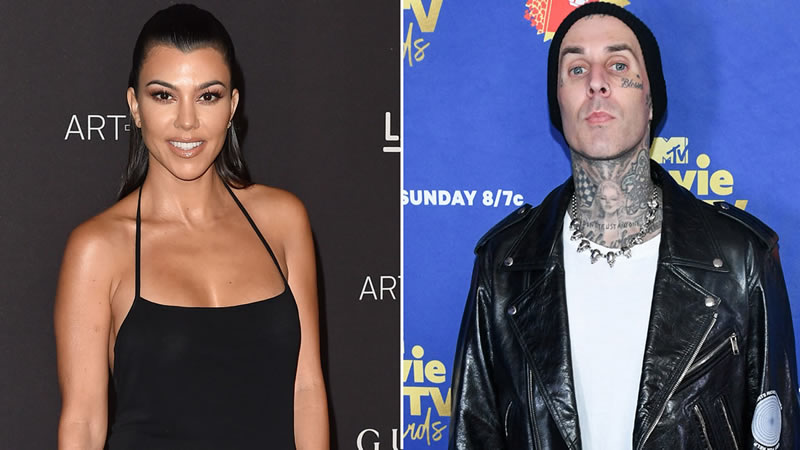 Kourtney Kardashian and Travis Barker are in the midst of an unexpected, intense relationship and many fans just can’t get enough.

The seemingly mismatched pair have only been dating for around six months, but have not hesitated to share flirty details about their romance with their social media followers.

Notably, Barker has already gotten Kardashian’s name tattooed on his body, and many fans suspect that the two could even be announcing an engagement soon.

Still, their romance has not been without drama, and even Barker’s ex-wife has come out to snark about the drummer’s past with Kardashian’s younger sister, Kim Kardashian West.

When did Kourtney Kardashian and Travis Barker start dating?

Kardashian and Barker have known each other for years. Way back in 2017, reports circulated that Barker and his family, including his daughter, Alabama Barker, had a “power dinner” with the Kardashians and their good friend, actor Jennifer Lawrence.

In the years that followed, Barker and Kardashian were spotted together occasionally, mainly going to dinner with larger groups of friends. No one suspected that a romance would eventually crop up between the pair.

In January 2021, rumors started spreading that Kardashian and Barker were no longer “just friends,” and in February, the pair made it Instagram-official, sharing a photo of their clasped hands. Over the next few weeks, Kardashian and Barker continued to share pictures on social media, making it very clear that their love affair is for real — in spite of what the haters might say.

What does Kourtney Kardashian think about Travis Barker’s comments regarding Kim Kardashian?

As it turns out, Kardashian isn’t the only member of the family that Barker has been attracted to. The Blink-182 drummer once opened up about how he and Kardashian West crossed paths in the early 2000s when he was hanging out with Paris Hilton.

“With Kim, I wanted to be nothing but a gentleman to her. It was so weird,” Barker wrote in his 2015 book, in Can I Say: Living Large, Cheating Death, and Drums, Drums, Drums. “Mind you, I enjoyed hanging out with Paris, but I love curvy girls. Kim was eye candy. I was in no way disrespectful to Paris, but I couldn’t keep my eyes off Kim.”

In spite of his attraction to Kardashian West, Barker claimed that things never got intimate between them.

According to a report from US Weekly, Kardashian couldn’t care less about Barker’s past comments. “It wasn’t a dealbreaker,” a source admitted to the publication. “Ultimately Kourtney loves Travis and is pushing it aside. Kourtney and Travis are still obsessed with each other and going strong.”

In spite of the fact that Kardashian might brush aside Barker’s remarks about Kardashian West, Barker’s ex-wife isn’t quite ready to let the drama go.

Former Miss USA Shanna Moakler, who was married to Barker from 2004 until 2008, has gone on the record to allege Barker’s relationship with Kardashian West wasn’t as innocent as he made it seem. In fact, Moakler recently claimed that Barker had an affair with Kardashian, while he and Moakler were still married: “I divorced my ex because, I saw them — I caught them having an affair.”

Moakler also stated that Barker is “100 percent” lying about never hooking up with the reality star.

Neither Barker nor Kardashian has directly addressed Moakler’s allegations, and for now, at least, the couple seems to be unbothered by all the drama.

Madison LeCroy – Everything you want to know about Southern Charm star