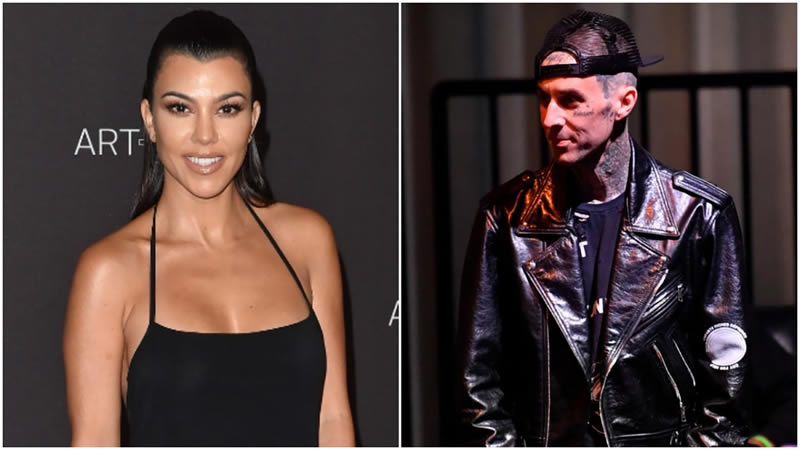 Kourtney Kardashian and Travis Barker spent a night in front of the big screen as fans of the duo looked for hints that the pair were expecting their first child together.

Kourtney Kardashian and Travis Barker have enjoyed a whirlwind romance since becoming official in February.

But the pair appeared to slow it down a bit over the July 4th weekend celebrations as they cosied up to enjoy a low-key night together.

Sitting in their home theatre, Kourtney posted a pic of her with her legs draped over her man while they cuddled in front of the big screen.

The duo’s sweet snap on the eve of July 4 comes as fans once again frantically scour their posts for any clues that the eldest Kardashian sister could be pregnant.

Kourtney, 42, and Blink-182 drummer Travis, 45, have regularly packed on the PDA on their social media posts but their sweet downtime over the weekend prompted fans to once more question whether the reality TV star was expecting her fourth child.

Last week a user on TikTok claimed a pregnancy announcement was imminent.

While standing in front of a picture of the pair, the user announced that she “knows for a fact” the couple are going to break the pregnancy news within the next “two weeks”.

“But I have to document it for myself because I know for a fact within the next week, two weeks tops, these two are going to be coming out with their pregnancy announcement,” she claimed.

While the source of the information wasn’t revealed, the “news” matches celebrity gossip Instagram account Deux Moi who recently said that an “A-Lister” was pregnant and would be announcing it soon.

In May, she was forced to deny rumors she was pregnant after posting what some thought were cryptic posts to Instagram.

When some fans pointed out a “baby bump” the star responded: “I gained a few pounds over this quarantine time, and I love my body and I’m proud of my shape and I’m obviously posting it and this is the shape of my body.

“I don’t think I look pregnant at all.”

On Sunday, Kourtney shared snaps from her bonding session with Travis’ daughter Alabama and his stepdaughter Atiana.