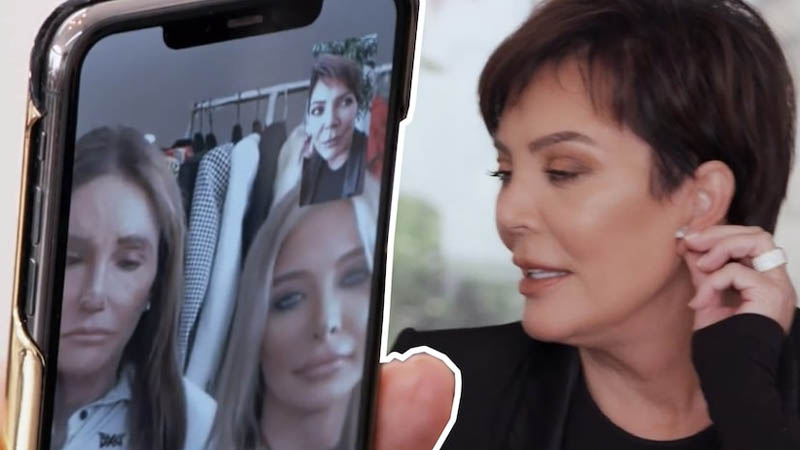 Kim believes her mom is still “super traumatized” from how their marriage ended.

Caitlyn Jenner got some screen time on Thursday’s new episode of “Keeping Up with the Kardashians.”

While the Kardashians are the first to admit the relationship between Cait and Kris Jenner has been — as Kourtney herself put it — “rocky,” the former’s friend and assistant Sophia Hutchins reached out to the latter for some business advice.

Speaking with Kourtney and Kim Kardashian, Kris explained she got a call from Sophia saying “she’s a little concerned about Caitlyn because she’s looking for something more to do with her career” during Covid times. “She was like, ‘If you have any ideas,’ and we started talking about things. I just don’t know, am I gonna want to go down this road?” Kris asked.

While Kourtney wasn’t surprised Sophia called Kris for advice — considering Jenner “was managing Caitlyn for 20-something years” — she said she was “surprised” her mom entertained the idea of helping out. When Cait came out with her transition, she did some interviews that hurt Kris in the process and the two have been on somewhat tense terms since.

Kim, meanwhile, thought it was “a big deal” that Cait was reaching out for help and thought it could be “therapeutic” for Kris to take her up on it. In a confessional, Kim said she believes her mom is still “super traumatized” from everything that went down between them — and added, “There’s no time limit that can be put on her for her to feel completely comfortable again.”

Later in the hour, Kim talked with both Khloe Kardashian and Scott Disick about the situation further — with Scott wondering where the two stood with Caitlyn now.

“I talk to Caitlyn every once in a while,” Kim replied. “[She’s] definitely super supportive and checks in and stuff like that.”

“I talk to Sophia very seldomly, and Cait’s probably like every blue moon,” Khloe added. “It’s just like we’re busy and it’s Covid. There’s no beef.”

“I just feel like that whole dynamic has been through so much and I think it’s taken mom a really long time to where she is now emotionally and how she feels about everything,” Khloe continued. “I don’t know if mom has anything more to give or if mom emotionally can handle that.”

In a joint confessional, Kim said Kris has had “her fair share of hurt” in her relationship with Caitlyn. “She has a hard time getting over things and it’s completely understandable.”

“Honestly, mom and I have not spoken about where she stands with Cait in a long time because it’s just better to not talk about it, so I don’t know if this is like, triggering for her,” added Khloe. “Or if she’s at the place where she’s like ‘Kumbaya, who cares?'”

It seems like that “Who cares?” vibe is what won out for Kris, who was seen taking a FaceTime call from both Cait and Sophia near the end of the episode. Hutchins explained there hasn’t been as much for Jenner to do during the pandemic, because speaking engagements came to a halt. Kris suggested her ex go all in on a YouTube channel — saying it was an easy way to put out content and also make some money.

“Believe me, this is not an easy situation,” Kris said in a confessional, “but Cait really does want my advice so I think what Cait should do is start doing YouTubes and really make it about what you’re great at.”

Kris even promised to connect Cait to the people at YouTube to help get all the logistics and monetization set up correctly.

In the end, Caitlyn made a YouTube video cooking one of Kris’ old recipes and got a call from both Kim and Khloe congratulating her on her debut. The sisters said they were proud of their mom for being so cordial and being “able to communicate and start that little relationship building.”

“I just want to help someone if they’re hurting or in any way need some inspiration,” Kris told her daughters. “It’s coming from my heart instead of somebody telling me to do it. You just want somebody to succeed and she really does have a lot to say.”

“Even though I can’t make things magically better with us, I’m just here to be supportive and I want her to be happy,” she added. “I was happy to offer advice and encouragement.”

Caitlyn, meanwhile, has been posting up a storm on YouTube for the past seven months. Her most popular video, with over 3 million streams, shows Kylie Jenner doing her glam (below).

Was Hailey Baldwin Dating Justin Bieber When He Was With Selena Gomez? Victoria’s Secret Model Answers