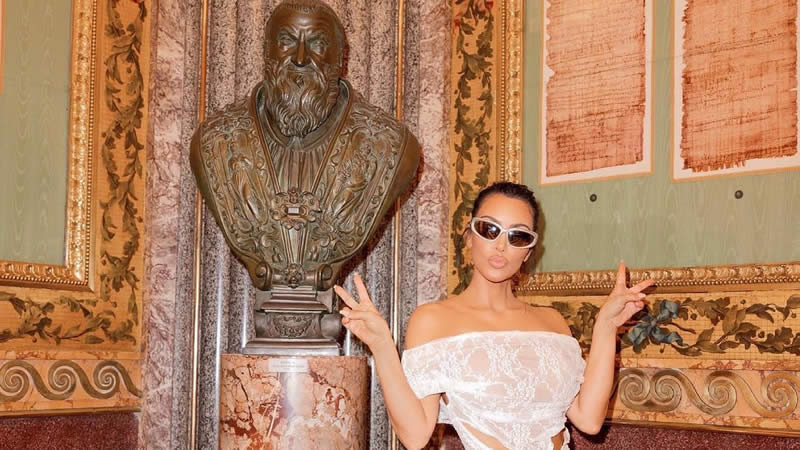 Kim Kardashian took to Instagram Tuesday to share another series of pictures taken in Italy. This time, she could be seen in the photos wearing a plunging dress and posing with famous designers.

In the first photo, the “Keeping Up With the Kardashians” star posed with two iconic fashion designers Donatella Versace and Kim Jones.

While Jones kept it simple by wearing a gray t-shirt and blue jeans, Versace donned a plain black shirt paired with floral pants. Kim, on the other hand, grabbed fans’ attention with her outfit.

The 40-year-old reality TV star and beauty mogul donned a dark brown low-cut dress and a pair of black strappy high heels. She also wore a red bolero cardigan and completed her look with a Sci-Fi Fantasy cap in navy blue and red.

“LEGENDS!!!” Kim wrote in the caption.

In the next photo, Kim flaunted her hourglass curves while walking on the side of the road. In the third photo, she could be seen enjoying a pasta dish.

The plunging dress was noticed by many, including her own sister, Khloe Kardashian, who commented, “I love your boobs.”

Considering Kim’s “Legends” caption, one of the fans replied to Khloe’s comment and wrote, “I think she was referring to her boobs in the caption.”

Kim shared the same photos on Twitter and people couldn’t stop sharing their reactions. Unfortunately, many of them were not impressed by her outfit.

A netizen even shared a screenshot of an old tweet by Kanye West, Kim’s estranged husband, saying, “I have to dress Kim every day so she doesn’t embarrass me [sic].” “Guess we now know he wasn’t lying,” the said Twitter user captioned the screenshot.

Another user compared Kim’s look with Rihanna’s and wrote, “Everybody can’t be Rihanna babe, this look isn’t giving.”

Meanwhile, one of her fans shared a meme to express love for the reality TV star and at the same time call her out for her outfit. “I love you, but those clothes? To SEE THE DONATELLA?” the fan said.