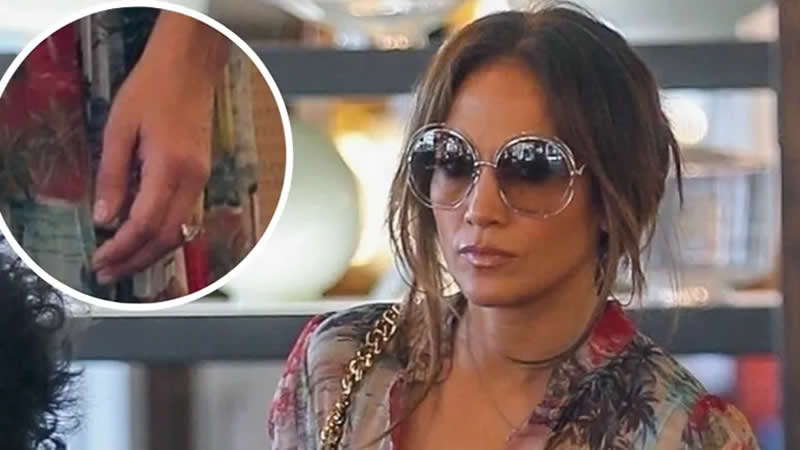 The moment fans have been waiting for for over twenty years may finally be happening: Jennifer Lopez and Ben Affleck could finally tie the knot.

While neither JLo nor Ben has confirmed their engagement, fans believe the pair may secretly be engaged after seeing photos of JLo with a huge rock on her finger.

Marriage has certainly been on JLo’s mind in one way or another this year as promoted her new film, Marry Me, and even gushed about Ben while promoting the movie.

JLo also wore a wedding dress to the movie’s premiere, paying homage to the movie’s title but leading some to believe that the actress and singer might be ready to try marriage once again.

See Jennifer Lopez wearing a giant ring while out shopping
The star was out shopping with her daughter Emme, wearing a floral print dress and sunglasses while browsing the shop.

However, fans were quick to notice another accessory that appears to be on her ring finger. Even from a distance, the large gemstone is hard to miss.

Although the rumors haven’t been confirmed, fans are excited to see what the future may hold for Ben and JLo, perhaps even a happily ever after.

And while she likely won’t wear the same wedding dress as she wore at the Marry Me premiere, fans know JLo won’t disappoint in whatever dress she decides to wear when and if she marries Ben Affleck.

Timeline of Jennifer Lopez and Ben Affleck’s relationship
Ben and JLo, known as Bennifer, have had a lot of ups and downs throughout the last several years.

The two first met in 2001 and quickly developed chemistry together off-screen, despite JLo being married to Chris Judd at the time. However, when her marriage to Judd ended, Ben was ready for her.

In November 2002, Ben proposed to JLo with an extravagant 6.1-carat pink diamond from Harry Winston, which reportedly cost $2.5 million.

Things heated up quickly which resulted in massive amounts of media attention, causing strain to their relationship. They postponed their wedding initially and then ended up separating in 2004.

The two then went their separate ways and ended up in marriages with kids, but remained on good terms. They finally began hanging out again in April 2021 and slowly rebuilt their romantic relationship.

Kylie Jenner Is In So Much Trouble After Posting This Instagram—What Was She Thinking?!