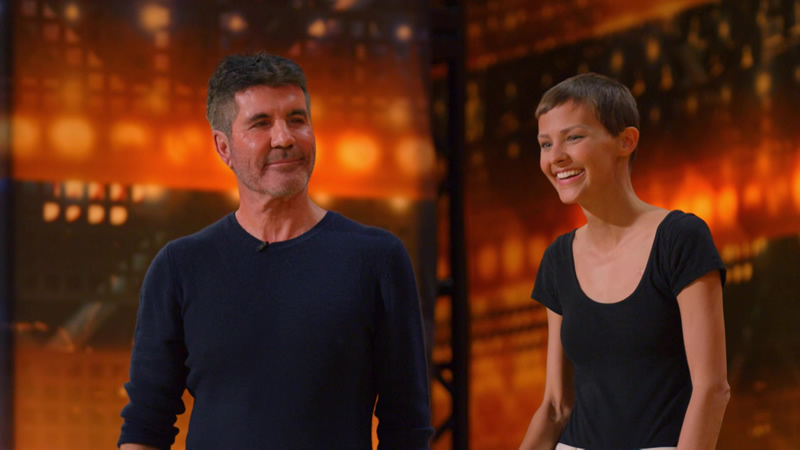 The America’s Got Talent season 16 contestant is staying positive through it all.

While singing her original song “It’s Ok,” Nightbirde’s authenticity and ethereal vocals took center stage. Simon, who is known to be a fairly harsh critic, even called her voice “absolutely stunning.”

During the audition, however, Nightbirde shared some tough personal news — she had “some cancer” in her lungs, spine and liver. Nightbirde also later revealed that she was given a 2% chance of survival.

When Howie told her that “nobody would ever know” she was dealing with cancer, Nightbirde replied, “Thank you. It’s important that everyone knows that I’m so much more than the bad things that happen to me. … You can’t wait until life isn’t hard anymore before you decide to be happy.”

In the end, Simon gave Nightbirde the golden buzzer and a hug on stage. “Everything about that was really special,” Simon told the artist, as gold confetti covered the AGT set.

Getting to that special moment on stage was anything but easy for Nightbirde. According to what the Zanesville, Ohio native revealed during her audition, Nightbirde had been taking time off from work in recent years to deal with her diagnosis. She has had cancer now three times.

In a blog post on her website, Nightbirde once wrote that she was diagnosed with terminal cancer on New Years Eve in 2019. As she described it, “innumerable tumors were found throughout my lungs, liver, lymph nodes, ribs and spine.”

“I was on the living room floor leaning over the report, head in my hands. Six months to live. Two percent chance of survival,” she wrote.

Another blog post explained that Nightbirde then moved to California and underwent treatments. On July 20, 2020, Nightbird posted a celebratory video on social media declaring that she was “cancer free.”

As for the latest health update on the singer, Nightbird told NBC4i.com the day after her AGT audition aired that she currently has cancer again and isn’t “in the clear.” That said, she was actually sicker earlier this year when the audition happened than she is presently.

“Physically, I’m doing really well,” Nightbirde explained to the outlet. “Again, for me it’s just like miracle after miracle after miracle. I just finished up some treatments a week ago and the doctors are anticipating that it’s going to take care of everything that was left over. We won’t be able to test — it’s too early to really check. It’ll be a few more months until we can go back in and see what’s going on. But I’m expecting good news, I really am.”

In the same interview, Nightbirde gave further insight into why she decided to change her name. As she revealed, the singer had the same dream multiple nights in a row where birds were singing outside her bedroom window in the dark. While the first two times were, in fact, dreams, the third time ended up being real.

“The birds were singing as if it was morning but there was really no sign of the light yet,” she noted. “And I wanted to embody that. Being somebody that could sing through a dark time because I was so full of hope and assurance that there would be a morning.”

As for her continued AGT journey, Nightbirde is “amped” about the live shows and excited to take the stage later this summer.

“I’m completely blown away, overwhelmed, speechless,” Nightbird said while reflecting on her audition. “It’s going to take me a long time to even comprehend what happened. [It’s] so amazing. “