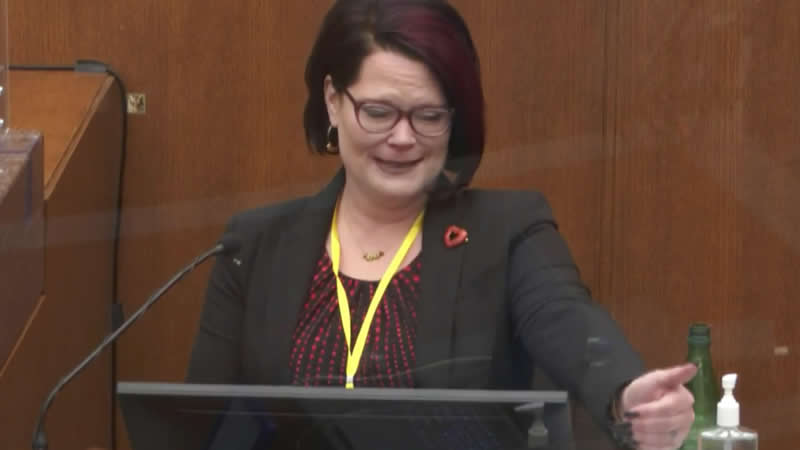 George Floyd’s girlfriend sobbed in court as she described him as “sweet” and “a momma’s boy”.

Coffee shop worker Ms Ross wore a necklace bearing Mr Floyd’s name as she gave evidence in the trial of Derek Chauvin, 45, the police officer accused of murdering him.

Wiping tears away, Ms Ross said: “Floyd is a momma’s boy – I could tell from the minute I met him.”

She added that after his mum died he “didn’t have the same kind of bounce that he had… he loved his ma so much”.

Ms Ross smiled as she talked about first meeting him in 2017 at the Salvation Army centre where he was a security guard.

She said she was upset and Mr Floyd offered to pray with her. She told the court: “It was so sweet.”

Ms Ross, who dated him on and off, said they both had an opioid addiction after suffering chronic pain.

She added they bought opioids from Morries Hall, who was in Mr Floyd’s car the day he died in Minneapolis in the US last May. Mr Hall is now refusing to give evidence at the trial.

Mr Floyd, 46, died shortly after being arrested for allegedly trying to use a fake $20 note in a shop.

Footage shows him crying and saying: “Please don’t shoot me, Mr Officer. I’m not a bad guy. I lost my mom.”

Paramedic Seth Bravinder said he arrived and saw Mr Floyd on the ground in the street with “multiple” officers on top of him.

He added the ambulance crew had to ask police to move.

Prosecutors say he kept his knee on Mr Floyd’s neck for over nine minutes. The trial in Minneapolis continues.