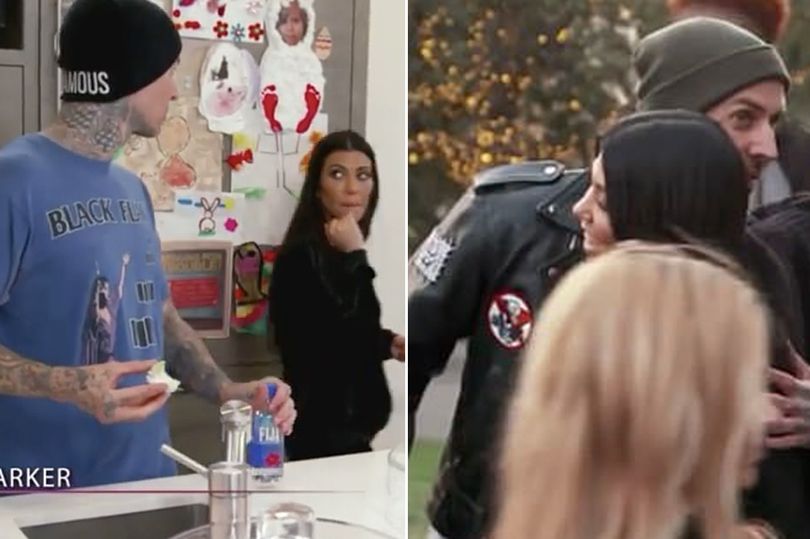 Their steamy romance has been splashed across their Instagram accounts with endless PDA snaps in recent weeks.

But Kourt and Travis go way back because they have been friends for years.

Now fans have unearthed old episodes of Keeping Up With The Kardashians where the pair had natural chemistry as pals.

They were in disbelief they hadn’t seen the connection before, with some even claiming it was proof Travis had always been “waiting” to go out with Kourtney.

Among the sea of comments, one wrote: “He’s been in love with her for a long time, you can tell the way he looks at her.”

In a throwback Christmas-themed episode, the duo were seen exchanging a look as Kourt sucked her finger.

They went onto join their kids in making extravagant gingerbread houses.

Fans flooded the comments section with their confidence Kourtney has found “real love” with Travis.

“We can say Kourtney is only Kardashian has found real love.”

“Wow he been around for a minute. That’s a friend who made it out the friend zone congrats.”

“I like to think he was lowkey in love with her here and just want to spend time with her and be around her.”

“Plot twist: they’ve been dating this whole time but only revealed their relationship until after filming was finished.”

“This is why Steve Harvey said men aren’t your friends ladies… their just waiting for the small crack in the door when your single. lol well good for them.”

They were friends before the couple become lovers.

Kourt and Travis first come into each other’s lives when Khloe moved into the same road as the musician.

It’s been more than six years since they embarked on an unlikely friendship together and fate threw them together.

They were first romantically linked in March 2019 but Travis shot down the rumours back then.

Travis has a son Landon, daughter Alabama and stepdaughter Atiana with his ex-wife Shanna Moakler.

Kourt has three children – Penelope, Mason and Reign – with her ex Scott Disick.

Notably they both have a good relationship with each other’s kids.