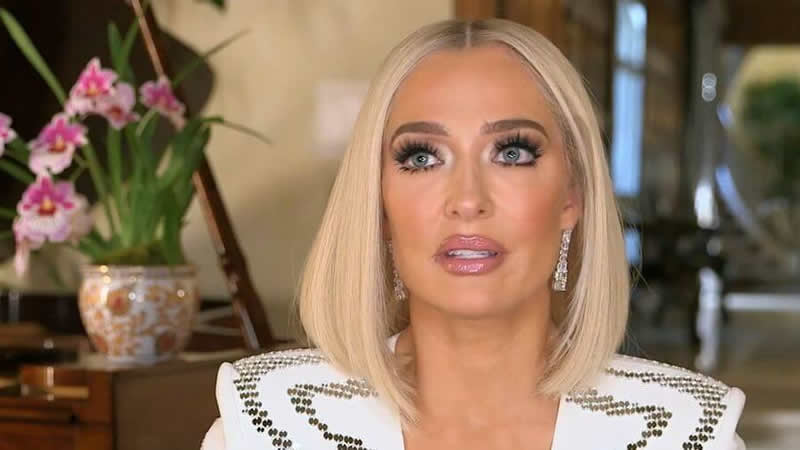 Welp, she tried. Another swing and a miss in the game of life that is Erika Jayne. The Real Housewives of Beverly Hills star is probably regretting any and all references to being XXPEN$IVE, and it might be time to pay the piper.

Erika and Tom Girardi are in a heap of trouble. Tom managed to screw over some former clients in sensitive positions while he and Erika peed in gold toilets and propped Chagalls against the dining room wall.

Erika has been running into a lot of obstacles since she and Tom were both implicated in an embezzlement scheme involving the nonpayment of Tom’s clients.

They are also being accused of using their divorce as a cover to hide assets to prevent them from being seized in the name of debt collection. Erika is doing everything she can to prevent her “household items” from being nabbed so widows and orphans can eat.

Despite EJ’s efforts to block further investigation, the judge said, “How many fucks do I give? NONE, NOT ONE ZERO ZERO DONE!”

Not a great day for Erika, but I suppose those good days might be numbered. While it’s doubtful she will go to jail unless a smoking gun of evidence is found against her, none of what’s happening is a good look. Her carefree and nonchalant attitude about the gravity of the allegations is also troubling. But Erika has a show to do and nothing will stop her from telling her side, unless the case had a gag order placed by the courts.

Speaking of a gag order, Erika and her team recently went to the judge presiding over this case to impart their displeasure at having attorney Ronald Richards brought on board to personally investigate Erika and her remaining assets.

No word on whether or not Mikey Minden qualifies as a remaining asset, but he’s likely to turn on EJ once he’s appointed driver of the renovated school bus now acting as Erika’s main transportation for touring. Sorry about that first class airplane stuff, buddy. Anyfraud, Ronald bothers Erika because of his particular interest in Tom’s dastardly deeds.

According to Radar Online, the request for the gag order was given a big fat NOPE by the judge. A hearing was held this week and the judge sided with the trustee and the motion to officially hire Ronald was approved.

And I guess the judge was feeling particularly froggy and went ahead and denied the gag order as well. So basically the only person gagging now is Erika. The judge further believes Erika might be responsible for upwards of $7 million of Big Tommy’s debt.

What’s next for Erika? Well, she can’t sell her clothes online and her petition to stop the sale of the Pasadena Palace didn’t go through. To make things worse for EJ, Tom has already requested her pursuit of alimony or spousal support be terminated.

Step aside Kyle Richards, Kim Richards, and Denise Richards – someone might want to polish up an honorary diamond for ‘ol Ronald because he’s about to become the most famous Richards of Beverly Hills.