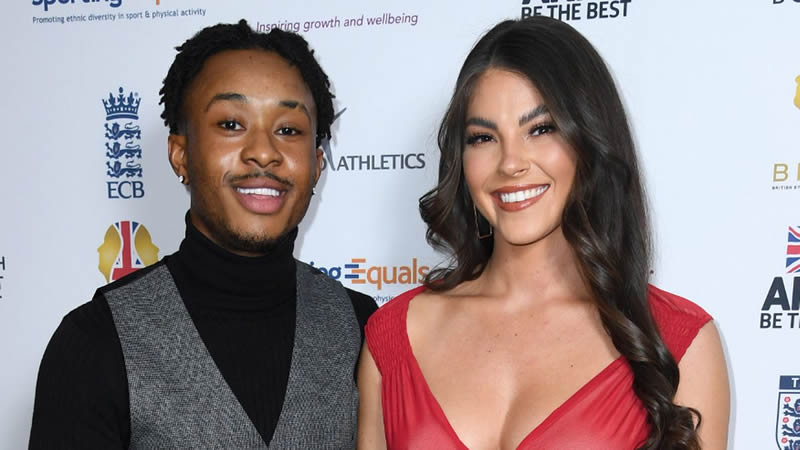 They met on the first winter series of Love Island in 2020, though they didn’t strike up a romance until they left the villa.

And Rebecca Gormley and Biggs Chris packed on the PDA as they enjoyed a meal at San Carlo before heading to rooftop lounge Syon Lounge in London on Wednesday.

The loved-up couple, aged 23 and 28, were also joined by former co-stars Nas Majeed and Eva Zapico as they caught up in the British capital.

Rebecca went braless in a white crop top which she teamed with a pair of high-waisted denim shorts.

Rebecca styled her brunette locks into a sweptback ponytail plait, adding a slick of glamorous make-up.

While Biggs looked stylish in a grey T-shirt, black shorts and a Prada bucket hat teamed with an orange crossover bag.

The couple couldn’t resist packing on the PDA as they enjoyed a tender kiss while stepping out in London.

Elsewhere Nas and Eva also looked loved-up as they sweetly walked hand-in-hand during the double date.

The couple went official in July when Nas revealed he had finally asked Eva to be his girlfriend after meeting on Love Island in 2020.

Eva cut a low-key figure in a purple top and black snakeskin style trousers which she teamed with a Gucci handbag and bomber jacket.

While Nas looked dapper in black trousers, a loose-fitting white T-shirt and a Balenciaga crossover bag.

The outing comes after Rebecca and Biggs sparked speculation they are expecting a baby together with a cryptic TikTok caption.

Taking part in TikTok’s couple’s challenge, Biggs shared a video of the pair posing side by side as they prepare to move in together.

Several fans quickly commented on the post and speculating that Rebecca could be pregnant.

Rebecca is leaving her native Newcastle to stay near Glasgow in the ‘dream home’ Biggs is building.

‘Rebecca will be moving in soon – I’m really excited. She’s so close to her mum, but said she would move up to Scotland with me.

‘I’m building a home and I’m hoping it’ll be ready later this year. I got a property 18 months ago, it’s been a long process getting planning permission.’

Biggs added he would be knocking down the house already on the land and building ‘something decent’, with the couple moving in together later this year.