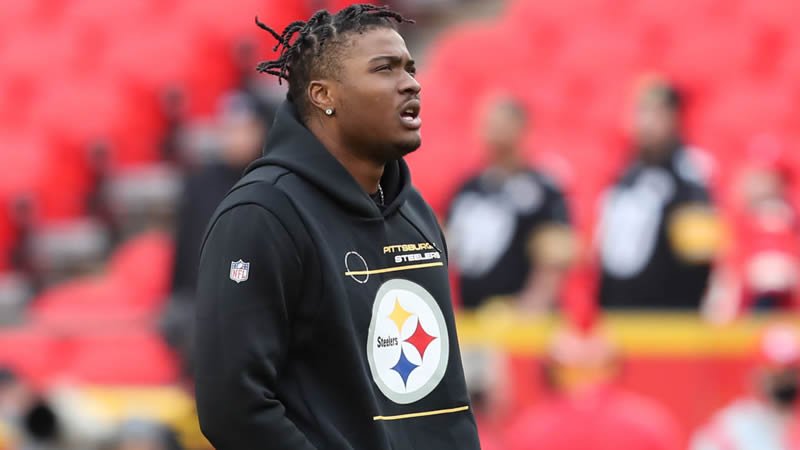 Kalabrya Haskins grieved the loss of her husband and Steelers quarterback Dwayne Haskins in a recent statement with the football team.

Kalabrya shared that she is grateful for the support she has received since Dwayne’s death on April 9. “I would like to express my sincerest gratitude to every living soul who has supported our family during this arduous time of loss,” she wrote in the statement.

“The overwhelming thoughts and prayers have been fuel for our emotional depletion. All of your blessings have been greatly valued and appreciated.”

She continued, “The meaningful touches and impact Dwayne made as a husband, son, brother, teammate, and friend is a timeless treasure imbrued in our hearts.”

The 24-year-old was in Florida to train with his fellow teammates and he was killed by oncoming traffic while walking, “attempting to cross the westbound lanes of Interstate 595,” the Florida Highway Patrol said in a statement to E! News. “Unfortunately, he collided with an oncoming dump truck. Mr. Haskins was pronounced dead on the scene.”

“I am truly grateful to everyone who has been by our side as we mourn his untimely passing,” Kalabrya said. “Our family implores for your continued prayers, yet continued respectful privacy as we painfully grieve.”

Dwayne previously played for Ohio State University and left school with two years remaining to go pro, but not before becoming a Maxwell Award semifinalist for the Heisman Trophy finalist. He was drafted by the Washington Commanders in 2019 and later signed with the Pittsburgh Steelers in 2021. He played with the team for about a year before his death.

Kalabrya went on to share the impact Dwayne had on football and the people he loved, writing, “My husband was more than a great football player. He had the smile of a rainbow that touched the diversity of so many.

He will forever rest and remain in our hearts till the end of time. His eternal love will always reside with us, Ohio State, Washington Commanders, and Steelers Nation for eternity!”

She added, “LOVE OF MY LIFE, FOREVER…REST IN THE BEAUTIFUL PEACE OF HEAVEN!”

After his death, Steelers head coach Mike Tomlin shared his sympathies with the Haskins family on Twitter, writing, “I am devastated and at a loss for words with the unfortunate passing of Dwayne Haskins.

He quickly became part of our Steelers family upon his arrival in Pittsburgh and was one of our hardest workers, both on the field and in our community. Dwayne was a great teammate, but even more so a tremendous friend to so many. I am truly heartbroken.”

The late quarterback was known by his nickname, Simba, as in The Lion King. He told NBC Sports that the moniker derived from his childhood when his mother would comb out his hair and compare it to a lion’s mane.

As a kid, he connected to the story of a cub’s journey to becoming king, telling the outlet, “The story behind him growing to the king, going through adversity, and having to fall to get up and that’s just something that resonates with my story. Everyone sees the highs of everything but not what it takes to get there.”

The family plans to hold a celebration of Dwayne’s life on April 22 at the Allegheny Center Alliance Church in Pittsburgh, according to the statement.

Will Smith’s longtime friend Jazzy Jeff comes to his defense over the Oscars slap: ‘It was a lapse in judgment’