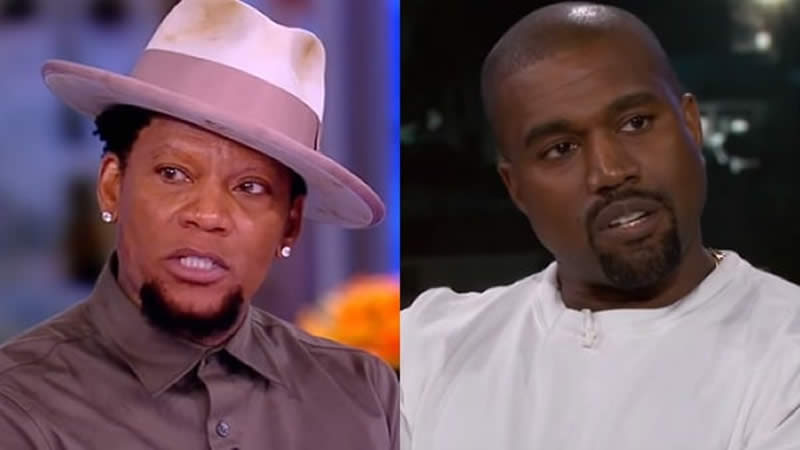 D.L. Hughley is unfazed by Kanye West’s recent threats against him online after the comedian blasted him for his antics regarding Kim Kardashian, responding on social media over the weekend.

The Original Kings of Comedy star clapped back at the Donda 2 rapper on Sunday (March 13th) on his social media accounts, mocking him for his behavior and swiping at his mental health issues.

Hughley made his comments after West made a series of posts through his Instagram account targeting the comedian, who had taken him to task for his behavior towards estranged wife Kim Kardashian in an interview with DJ Vlad including stating that he was “stalking her” as the two are in the midst of a divorce.

In a now-deleted post, the artist now known as Ye wrote: DL Hughley is a pawn Yeah I know a king is not supposed to address a pawn but I address everything and find addresses DL So don’t speak on me or my children I can afford to hurt u.”

Hughley responded hours later on Twitter, referencing Ye’s mental health: “Hmmm! Ain’t it weird that #Kanye supposedly has all these goons who will kill for him, but not one of them will get his prescriptions filled? Here’s thought while you’re on your way to kill me in Calabasas, how about somebody drop by CVS and pick up his Xanax! Lol #TeamDl”

He didn’t stop there, referring to the rapper’s current rubber boot fashion choice, and closed out by throwing Pete Davidson, SNL comedian and Kim Kardashian’s boyfriend in the mix with his final tweet on the matter. “It’s just too bad that you acting like a nut won’t stop [Pete] from Bustin one!!”, he wrote.

Hughley wrapped things up on his own Instagram post by sharing his first tweet with a more frank caption: “You can tell when people surround themselves with real ones. REAL ONES in your corner would NEVER allow you to threaten a man or his family, especially in a public forum.”

The 44-year old West did seem to address the comedian’s response in a general sense later that day, stating that attacks on his mental health were a “weak tactic.” That post, shared to his Instagram, was soon scrubbed from his account.