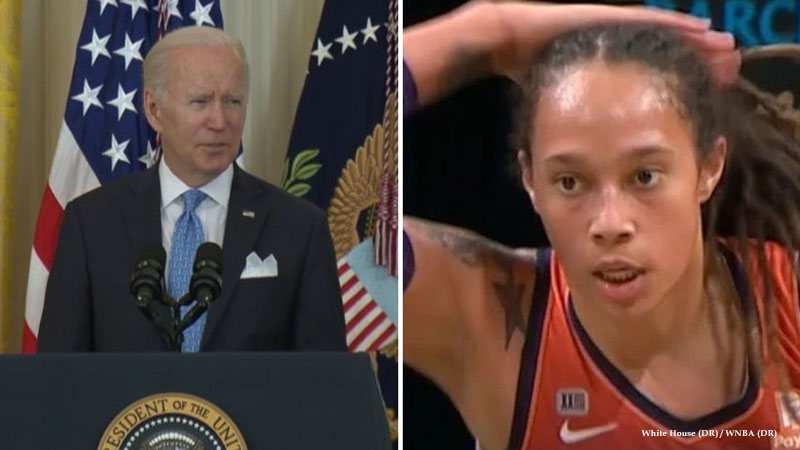 WNBA star Brittney Griner, who has been imprisoned in Russia since February, wrote a letter to President Joe Biden. Read why the athlete is “terrified I might be here forever.”

President Joe Biden is getting a massage from Brittney Griner.

The WNBA player wrote a handwritten letter to the White House after being detained on allegations of smuggling drugs into Russia on February 17.

In her message, which was obtained by complex from the athlete’s publicist, Brittney detailed the thoughts that cross her mind as she sits behind bars, writing, “…as I sit here in a Russian prison, alone with my thoughts and without the protection of my wife, family, friends, Olympic jersey, or any accomplishments, I’m terrified I might be here forever.”

Her letter arrived at The White House on July 4, but the day holds significance for her in more ways than one.

“On the 4th of July, our family normally honors the service of those who fought for our freedom, including my father who is a Vietnam War Veteran,” the letter read. “It hurts thinking about how I usually celebrate this day because freedom means something completely different to me this year.”

While the 31-year-old noted that they realize Biden is “dealing with so much,” she asked that the president “please don’t forget about me and the other American Detainees.”

“Please do all you can to bring us home,” she wrote. “I voted for the first time in 2020 and I voted for you. I believe in you. I still have so much good to do with my freedom that you can help restore.”

In addition, Brittney mentioned the people she is thinking of while she is being kept in custody, including Cherelle Griner, her wife of three years.

“I miss my wife!” she wrote. “I miss my family! I miss my teammates! It kills me to know they are suffering so much right now. I am grateful for whatever you can do at this moment to get me home.”

Brittney was detained at the Sheremetyevo airport in Moscow five months ago on suspicions of having vape cartridges allegedly containing hashish oil in her luggage. The basketball star made an appearance in court for the first hearing of her trial on July 2. She splits her off-seasons between playing for the Phoenix Mercury and a Russian basketball team.

Brittney didn’t enter a plea at the time. However, she might spend up to 10 years behind bars if found guilty.

The WNBA has honored Brittney since her arrest by adding floor decals with her initials and jersey number inside the arenas of all 12 WNBA teams.

Reflecting on the impact of the WNBA’s support, Cherelle noted in a May 25 appearance on Good Morning America, “Things like that matter, like, it has her hopeful.”

“It lets her know she’s not forgotten,” Cherelle said. “Those small moments, I know, give her some type of hope.”

The next session for Brittney’s court hearing is scheduled for July 7.

Kate Middleton wore a €1.7K Wimbledon dress which is a steal for €17 from Shein