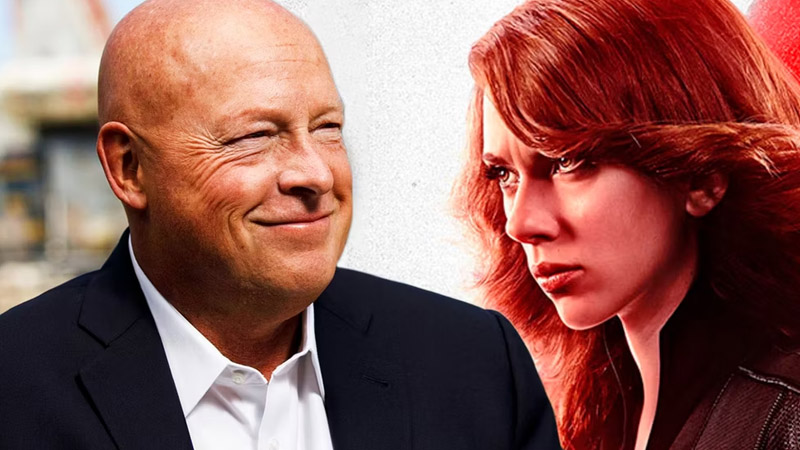 In a move that shocked everyone from Hollywood to Wall Street, Disney made a leadership change. The company reinstated former CEO Bob Iger for a period of two years. A longtime veteran of the House of Mouse, Bob Chapek had a tumultuous reign, but it was the Scarlett Johansson lawsuit over the release of Black Widow that doomed his tenure.

Not only did Chapek have a 26-year career with Disney, but his contract was also recently renewed for three years. Yet, the corporate world rumor mill began circulating that Iger regretted appointing his successor. When the story is ultimately written on what happened behind the scenes, Chapek’s downfall will almost certainly begin with the lawsuit.

If the many corporate interests of Disney represent a multi-tentacled money squid, its weird beak mouth is the talent. Whether it’s the animators and voice actors behind Mickey or the many marquee stars behind Marvel heroes’ masks, they are quite literally the face of the company. The sole exception is, perhaps, ESPN’s sports arm, but even that branch is often used to promote Disney’s films and series.

Chapek’s mishandling of Florida’s discriminatory “Don’t Say Gay” bill, surging post-pandemic park prices, and everything else likely contributed. But the lawsuit represents an unquantifiable quality in the professional relationship, something that Chapek lacked and Iger has in spades.

After Avengers: Endgame, there was, perhaps, no original member of the team more important than Scarlett Johansson’s Black Widow. She sacrificed herself in that film, but she would get a victory lap in her character’s eponymous film.

Not only that, but as only the second woman-led Marvel Studios film, it felt overdue before the pandemic even hit. Once it did, Disney was the only company with the kind of wiggle room to test the waters by releasing the movie in theaters. Yet, the decision to simultaneously release on Disney+ is what created the problem.

Even without the money that went to Black Widow on Disney+ Premier Access, the film would’ve struggled to outearn films like Ant-Man. A prequel film, it didn’t feel as necessary to understand the coming Marvel Cinematic Universe story. Still, Black Widow ended up a beloved classic, in part because it’s Scarlett Johansson at her best.

Black Widow was the fourth-highest-grossing film of the year domestically, and the three ahead of her were also Marvel films. Still, with a total box office of less than $400 million, the film underperformed. If anything, the direct-to-consumer money helped bolster the profit margin, but Chapek apparently failed to check in with Johansson, the film’s star and executive producer.

Bob Iger would never make such a blunder. During those tense months when Spider-Man was almost out of the MCU as talks between Sony and Disney fell apart, star Tom Holland made his case to Iger directly. If Iger had been in charge of Black Widow‘s release, he likely would have involved Johansson at every step and effectively sold her on the plan.

Bob Iger has a much different leadership style than Chapek, and, given his stewardship of the company, it makes sense to bring him back. CEO culture, especially in the United States, is very strange. Some people cheer for them like their favorite quarterback. Of course, if any of these multimillionaires live up to the hype, it’s Iger. He’s either a genius-level 3D-business-chess thinker or a reckless high-stakes gambler with incredible luck.

He was responsible for Disney buying up franchises like Marvel and Star Wars. The box office profits from those studios alone paid off his bets. He also initiated the takeover of 20th Century Fox to get Marvel its X-Men and the Original Trilogy that pre-credits fanfare back.

Without all these properties, the Disney+ that Bob Iger envisioned would never have come to pass. Iger believes in the direct-to-consumer model, but he’s proven savvy enough to know that he has to make others believe in it. Johansson waited more than a decade to headline her own solo film, and she definitely didn’t want it to be the only Marvel Studios film not exclusive to theaters.

Chapek seemed, at best, unconcerned about that. Iger would’ve made an offer to Johnasson and, likely, gotten her on board with the plan. The breakdown of that relationship was the first sign to the public that Chapek didn’t have the magic that Iger did. So, while Disney’s shareholders are celebrating, Iger may not be able to spend his way out of this mess. If belt-tightening happens, maintaining the relationships with the creative talent on both sides of the camera will be crucial. It’s exactly the kind of thing Iger is good at.

It’s unclear what the future of Disney will look like with Iger, especially since he’s inheriting a company in worse shape than he left it. Still, whatever he does, he will take a talent-first approach because he knows the best people to “sell” Disney to the world are its biggest stars.