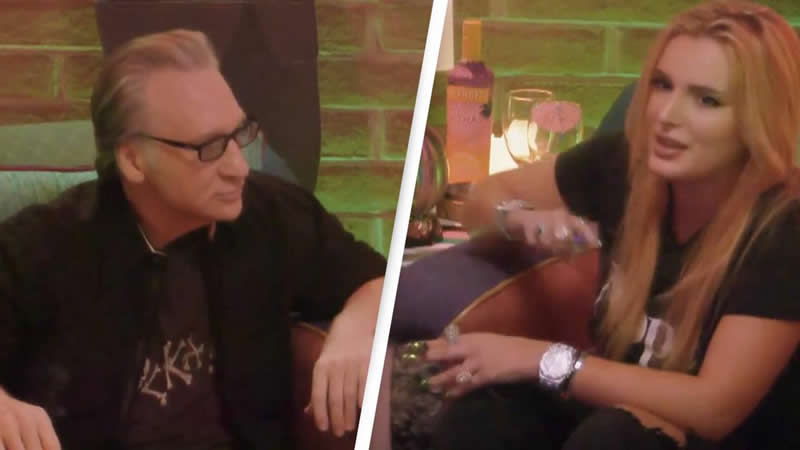 Bill Maher is coming under fire for comments he made about Bella Thorne’s mental health.

This week Maher sat down with the Paradise City actress on his new podcast series Club Random, in which they discussed Thorne’s new cannabis brand, Forbidden Flowers. Thorne shared that her inspiration behind creating the line came from how cannabis use helped her with her severe stomach issues and “crippling anxiety.”

The comment struck a nerve with Maher, who questioned what youth of today, who are currently living through a pandemic, have to be anxious about. He then questioned how informed Gen Z was about today’s issues.

After Thorne pushed back, sharing that there’s a lot of “bad” in the world that this generation is witnessing both in the news and on social media, Maher added, “I think a lot of the people who are the most anxious have the most privileged lives. Look at your life! Everybody wants it.”

Later on, Maher suggested that the younger generation was so focused on their own mental health that they couldn’t be informed about the real problems of the world. Thorne called his viewpoint a “narrow” one.

“Everyone really has their trauma. What’s happening in Ukraine is unspeakable — that is something else,” the former Disney Channel star said. “But as far as trauma for every human being, I lost my dad when I was 8. I was molested growing up.”

Maher walked back his comments but said that spending “every day with a therapist” could be an “indulgence,” pointing out that not everyone can afford that.

Listeners on Twitter criticized Maher’s interpretation of Thorne’s comments, with one writing, “Bill, normally I defend you but…. Eeeeyyyyyyy…. This was not a good look. People have anxiety for all sorts of reasons. Stick to your show. This is not the lane you want to drive in.”

Another added, “Boomers like you Bill are the cause of our youths’ anxiety. The world is 100% more messed up than when you were 24, you believed in the future most youths don’t.” A third wrote, “Sometimes @billmaher says and does things that are dead right but THIS is disgusting. Show some damn empathy.”

While Thorne did not comment on the criticism against Maher, she did retweet a video of their conversation, which, save for the anxiety comment, appeared friendly — and, naturally, involved testing out the Forbidden Flowers product with Maher, who is a longtime marijuana enthusiast.

Thorne has shared her struggles with mental health before. In 2017, she told her Twitter followers she was suffering from depression, and later shared that she believes it was sparked by a prescribed acne medication she was taking. In 2018, she opened up on Instagram about being a survivor of sexual and physical abuse, writing, “Over and over I waited for it to stop and finally it did. But some of us aren’t as lucky to get out alive. Please today stand up for every soul mistreated.”

In 2020, she spoke to The Independent about how she doesn’t want to hide aspects of herself from the public.

“I can’t be open,” she said at the time. “I can’t be openly pansexual, or openly molested, or all this other fed-up s that I talk about. I can’t be like most celebrities and hide all that mental s*** – the depression, the anxiety, the eating disorder. No. I’m not gonna put that way deep down where no one can find it.”