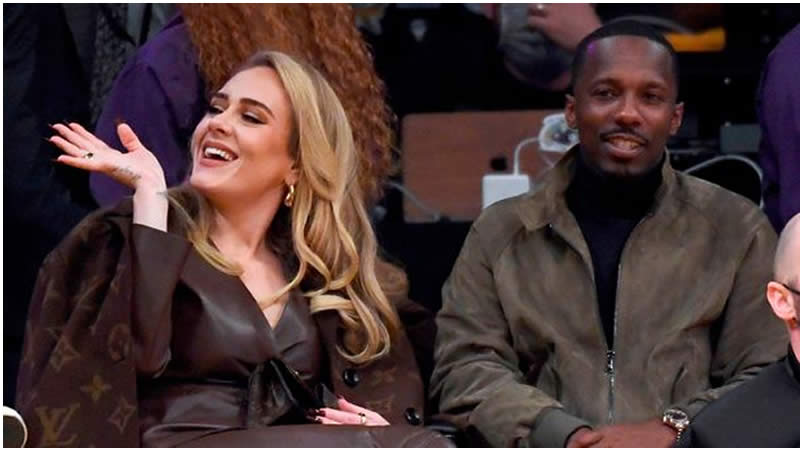 With so many Adele and Rich Paul breakup rumors swirling around recently, the Grammy-winning singer has finally taken to social media to set the record straight on her current relationship status—and the way she did it was cheeky as ever!

As a refresher, Adele and her boyfriend Rich Paul started dating in 2020. Rich is a big-time sports agent from Cleveland, Ohio, and has worked with the likes of LeBron James. Given his career, it’s no surprise that his first public date with the Grammy-winning Brit took place at a basketball game.

The pair made their public debut in July 2021 while attending Game 5 of the NBA Finals, where the Milwaukee Bucks beat out the Phoenix Suns.

Just three months later, Adele opened up about her relationship with Rich for the first time in an interview with Vogue UK. The star reflected on her first public outing with the sports agent, telling the publication, “I didn’t mean to go public with it.

In November 2021, Adele gushed about Rich again during her One Night Only special on CBS with Oprah Winfrey. “He’s just hilarious,” she told Oprah at the time. “Oh, he’s so funny, he’s hilarious, yeah. And very smart.

You know, he’s very, very smart. It’s quite incredible watching him do what he does.” The “Easy on Me” singer also noted that their relationship has been “very smooth” so far, explaining that it’s the first time that she’s ever truly “loved myself and been open to loving and being loved by someone else.”

But that was then—and in the months since Adele and Rich Paul breakup rumors have abounded. Keep on reading below to find out how Adele addressed the speculation herself.

Adele her boyfriend Rich Paul started making headlines in January 2022 for supposedly having a bit of a hiccup in their months-long relationship. The rumor mill continued to gain traction after speculation that Adele was skipping her 2022 BRIT Awards appearance following her Las Vegas Residency cancelation.

According to a source who spoke to The Sun, Adele was “trying to fix their relationship” at the time as “things have become strained.” The insider alleged, “[Adele and Rich] barely saw each other at the beginning of the month because he was away for work and she was trying to focus on the Vegas show.

She was upset he couldn’t be there with her when things started falling apart with the residency and it made things difficult for them both. She needed him there, but he couldn’t because he has his own busy career too.”

But the “Hello” singer didn’t leave her fans in the dark for too long; on February 1, 2022, Adele took to Instagram to share an update on the BRIT Awards—along with a subtle clarification on her relationship status.

“Hiya, so I’m really happy to say that I am performing at the Brits next week,” she captioned a photo of herself laughing at the time. “Anddddd I’ll also be popping in to see Graham [Norton] for a chat on the couch while I’m in town too! I’m looking forward to it!” She ended her post with the following: “Oh, and Rich sends his love.” So, there you have it—it looks like Adele and Rich Paul are still an item!

Paris, Prince, and Bigi Jackson make a rare appearance together for ‘MJ the Musical’ opening

Prince Harry rejected a meeting with William, claims the book