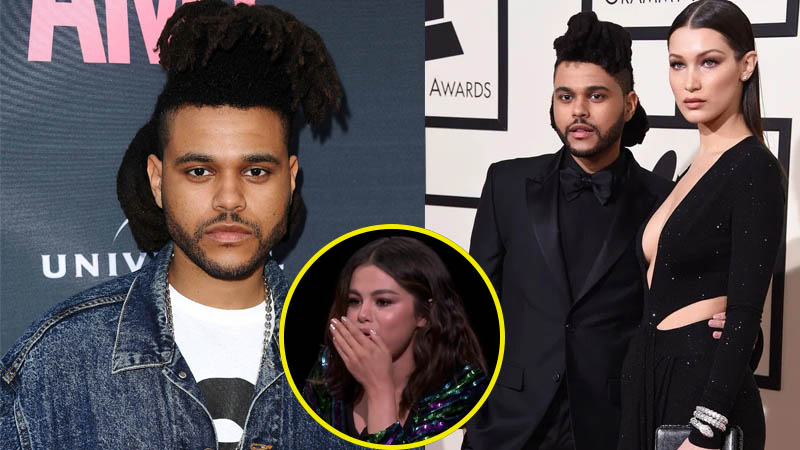 The year 2015 was a big one for The Weeknd – not only did his career take off but he also embarked on a high-profile relationship with model of the moment, Bella Hadid.

Since then, the A-list couple have kept fans hooked with their on again, off again antics. But there was high drama when during one off period, The Weeknd hooked up with Bella’s friend, Selena Gomez.

The Can’t Feel My Face singer’s relationship with Bella initially got off to a strong start. They met after he asked her to pose for the cover of his album, Beauty Behind the Madness.

She said no but agreed to meet with him anyway – and the attraction was instant.

“It just kind of fell into my lap,” The Weeknd – real name Abel Tesfaye – told Rolling Stone of their relationship, admitting that after years of playing the field he was finally ready for something serious.

The Super Bowl half-time performer continued: “But if I’d met someone two years ago, I probably would’ve f**ked it up. But I’m more – how do I say it? – clear-thinking now.”

When Bella turned 19 that October, the besotted Canadian bought her a Yorkie named Hendrix and joked: “I’m probably going to end up taking care of it.”

They made their red carpet debut at The Grammys in 2016 and he proved to be a big hit with her famous family, including model sister Gigi Hadid, Real Housewives of Beverly Hills star mum Yolanda Hadid and step-dad David Foster.

“He’s a good boy. I like him a lot,” the latter told TMZ.com. “He’s very responsible, he’s dedicated to his craft, he works hard.”

Then in November 2016 it was claimed that they’d decided to take a break, with a source telling E! News: “They are still in each other’s lives though, just not in the same exclusive capacity.”

But any hopes of a reconciliation were shot when he was spotted snogging Selena Gomez – who like Bella was a member of Taylor Swift’s squad – in Santa Monica, Los Angeles, soon after.

Bella promptly unfollowed Selena on Instagram and three days later uploaded a picture of a woman believed to be herself flipping the bird.

According to source, while the split hadn’t been ‘dramatic’, Bella was nevertheless “hurt and p**sed that he’s moved on so quickly with Selena.”

In March 2017, she broke her silence on her ex-boyfriend, telling Teen Vogue that she’d worked hard not to let his new relationship get the better of her.

“I’ll always respect him, and I’ll always love him. Sometimes you want to be sad about it or handle it differently, but at the end of the day, you never want to burn a bridge that you’ve fought so hard to build,” she explained.

But by October that year, it was all over, with Selena getting back with childhood sweetheart Justin Bieber – who later married Hailey Baldwin just months after their own split.

For Selena’s part, she insisted the separation with The Weeknd was nothing but amicable.

“Something that I’m really proud of is that there’s such a true friendship,” she told Billboard magazine.

“I truly have never experienced anything like that in my life. We ended it as best friends, and it was genuinely about encouraging and caring [for each other], and that was pretty remarkable for me.”

Just weeks later, he was spotted leaving Bella’s apartment in New York, sparking rumours of a reunion that they confirmed by snogging each others’ faces off at Cannes the following summer.

However, despite talk of an engagement, they went their separate ways yet again in 2019, with insiders claiming: “They are in different places right now, physically and mentally.”

Bella was seen leaving a nightclub as soon as her ex arrived, fuelling speculation that the split had not been a friendly one.

And last year he released a track titled Save Your Tears which is rumoured to be about his regrets over his supposed treatment of Bella and Selena.

With lyrics including: You could’ve asked me why I broke your heart/ You could’ve told me that you fell apart/ But you walked past me like I wasn’t there/ And just pretended like you didn’t care.” fans are convinced it’s about that awkward run-in at the nightclub.