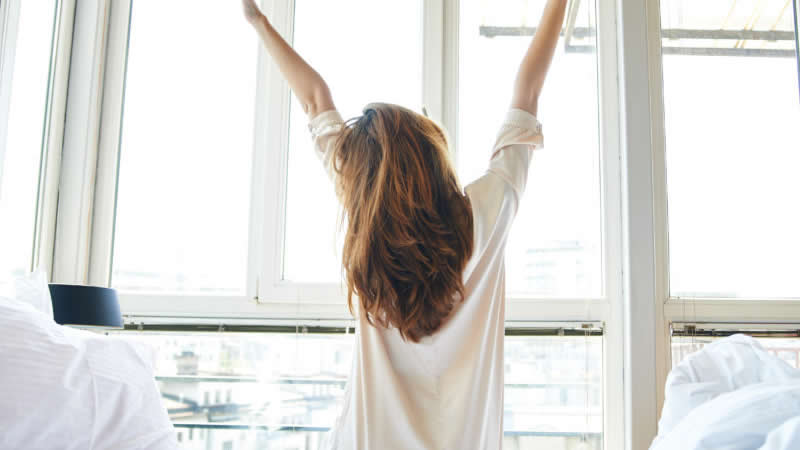 Not only does the early bird get the worm, but he’s g enerally happier and has a higher overall satisfaction with his life. “We don’t know why this is, but there are a few potential explanations,” writes researcher Renee Biss in a study conducted by the University of Toronto.” Evening people may be more prone to social jet lag; this means that their biological clock is out of sync with the social clock.” While there’s a strong argument that this bias is a holdover from when we were a farming society — research shows that people have naturally varying sleep profiles, also known as “chronotypes” — the fact remains that modern society is shaped around the early-bird ideal.

1. Decide That You’re Going to Wake up Early.

In one German study, researchers found that people who were warned that they were going to be woken up at 6 a.m. already had alertness-driving stress hormones building in their bodies at 4:30 a.m. Folks who weren’t warned didn’t have any of those hormones — and were groggier upon waking. “Our bodies, in other words, note the time we hope to begin our day and gradually prepare us for consciousness,” says Psychology Today writer Jeff Howe.

2. Clear Out Your Morning.

Psychologists talk about “cognitive loads” like most people talk about the weather. To say that something has a high cognitive load means that you have to put a lot of mental effort into it, like memorizing a poem or figuring out what to do with an Excel spreadsheet. You don’t want high cognitive loads in the morning, since it’s a waste of the scarce amount of willpower we have in a day, and it’s annoying to have to think about things when you just woke up. Routine is an ally in the war against cognitive load. Wear the same clothes, eat the same breakfast, do the same workout every day, and it’ll free up mental space.

3. Get Sun as Soon as Possible.

Like every other (non-nocturnal) living thing on Earth, humans get turned on by sunlight. A  University of Liege study found that people who got a bit of bright light early in the morning were more alert than a sun-starved control group. They also showed more activity in cognition-heavy parts of their brains. Plus, as the Huffington Post notes, it makes it easier to get to sleep at night. It also helps fight off Seasonal Affective Disorder during the short days of the winter months.4. No Matter What Happens, Don’t Hit Snooze.

You wake up with a wave of stress hormones; it’s your body’s way of getting you ready for the day. But if you hit the snooze button, then you’re telling your body to do the opposite, so you’ll end up feeling even more clumsy than if you’d just stayed upright.

5. Give Yourself a Pinch.

A University of Michigan study found that participants who massaged their pressure points got a boost of alertness. The way to do it, care of HuffPo: The study had volunteers stimulate  five pressure points  on the body for three minutes each: the top of the head, the point between your thumb and index finger, right below the center of the knee cap, below the ball of the foot, and the base of your neck.

6. Get up at The Same Time Every Day.

Our bodies function most effectively when they’ve got a consistent rhythm, which sleeping in on the weekends can interrupt. I f you wake up at the same time every day, you can train yourself to wake up without an alarm clock .7. Wake up With a More Gentle Alarm Clock.

The more jarring the sound that you wake up to, the more “sleep inertia” you’ll feel when you open your eyes. “Sleep inertia can feel worse when you’re awakened abruptly,” says Hans Van Dongen, an assistant professor in the University of Pennsylvania’s Division of Sleep and Chronobiology.  “A clock that allows you to wake up gradually may ease those first few moments of sleep inertia, which are the worst.”

Your blood gets a little stagnant when you’ve been sleeping all night. Get your circulation going by exercising. It doesn’t have to be a marathon; three minutes of basic yoga poses can wake your body up.

This one’s easy.  You lose water  by sweating and exhaling through the night — it’s part of the reason you lose a pound or two by the time morning comes — so you naturally need to replenish liquids when you wake. One full glass of water should do the trick .

Italian Beauty Secrets You Should Try