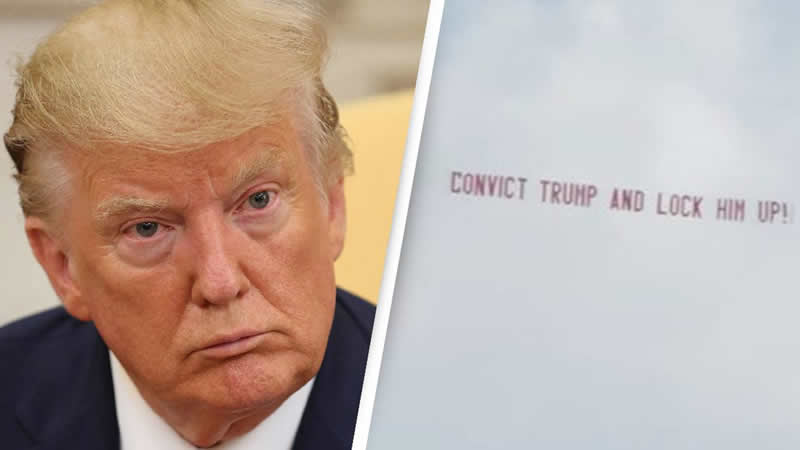 A woman who paid to fly a banner over Donald Trump’s Mar-a-Lago resort on Friday calling for him to be locked up told HuffPost that she did so because she believed the former president was a “dictator” who needed to be stopped.

The woman had paid for two aerial banners calling for Trump’s conviction in his impeachment trial in the Senate, where he was ultimately acquitted on Saturday.

The sign that flew over Mar-a-Lago said “convict Trump and lock him up.” The other, which flew over Daytona International Speedway in Florida, said “GOP grow a spine and expel Trump.”

“When Trump started talking about a third term and then started a chant at a rally of ’12 more years,’ I thought: ‘That’s it. That’s a dictator,'” the woman told HuffPost. The news outlet said the company that flew the banners confirmed her identity.

“My parents immigrated from Cuba in the 1960s. They know what a dictator looks like,” she added. “Trump and his supporters are authoritarian, completely offensive; they stand for what’s completely contradictory to this country’s ideals.”

She said that she contacted a Florida company called Aerial Messages and that its CEO, Remy Colin, was “really enthusiastic” about the project.

Ultimately, the messages did not work. The Senate did not reach the two-thirds majority required to convict Trump of a charge of inciting the deadly insurrection at the Capitol on January 6.

Trump has faced fierce opposition from some locals over his decision to live in Florida after leaving the White House. His neighbors in January took legal action to request that Palm Beach authorities instruct Trump to live elsewhere because the resort is a club that does not allow for permanent residents.

Officials said they would reach a decision in April, Insider’s Jacob Shamsian reported .

Two other anti-Trump banners were trailed over Mar-a-Lago in January. One of the banners said “Trump worst president ever,” while the second said “Trump you pathetic loser go back to Moscow.” Colin told HuffPost that his company was also responsible for those.