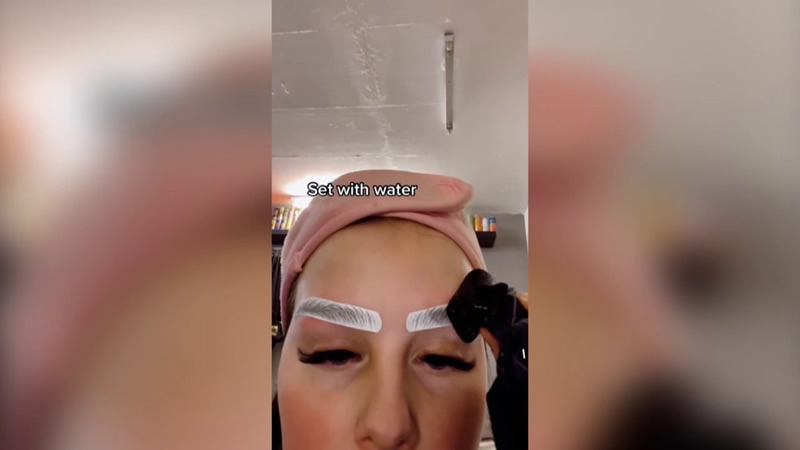 A woman who lost her eyebrows after a tinting disaster has shown how she recreates thick-looking brows using temporary tattoos you can buy online.

In the clip, uploaded on TikTok by user @sylviasaraa, she first shaves off her remaining wisps of eyebrow hair and explains there is a lot of scar tissue where the hair used to be.

She then gets out a pack of stick-on eyebrow tattoos and cuts out a matching pair with scissors and positions them carefully on her forehead.

Sylvia sets the tattoos with water and peels off the backing to reveal a thick eyebrow design.

Next, she fills in the rest of the brow using a pot of Dipbrow Pomade and puts concealer around the edges.

“And voila! It lasts for about one-and-a-half weeks,” she says in the on-screen caption.

The clip has been watched more than 2.5 million times on the video-sharing app and many people loved the final result and said the faux brows looked very realistic.

One fan said: “I honestly think they look amazing.”

“These are some of the best brows I’ve seen omg I love them,” gushed someone else.

A third fan said: “I’m so sorry for what happened to you you’re new eyebrows are amazing though.”

“Thank you SO much I have this issue and I was bullied so much because I struggled to draw them symmetrical and this is a lifesaver,” commented another viewer.

In the comments, Sylvia explained she lost most of her eyebrows as a teenager when she tried to tint them and wasn’t aware she was having an allergic reaction to the dye.

She said she had pain but thought it was normal and left the tint on for 40 minutes, when she eventually took it off the skin was red and burned.

“I grow hairs there but really few, thin and short hairs and nothing I can work with,” she explained.

This comes after a woman was mortified when she was left with “monster eyebrows” after having a microblading beauty treatment.