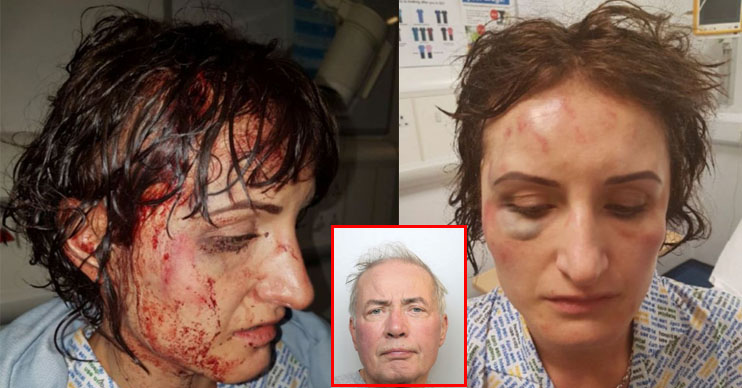 A woman’s screams are captured on a harrowing emergency call as her ex-husband bludgeons her in a shocking ambush attack.

Anna Butt has bravely shared photographs of her injuries to lay bare the horrific reality of domestic violence after surviving the hammer and screwdriver attack.

She was left battered and covered in blood after she was seriously assaulted by ex-husband Alec Butt, 71, who hid under bins to lie in wait for his victim near her workplace in Bristol.

Butt covered his face to hide his identity, pushed her up against a wall and struck her about her head, arms and hands as a witness screamed down the phone to a 999 operator “he’s ripping her face to shreds.”

As Anna fought him she pulled down his hood – and realised who her attacker was.

Audio of the attack released by police captures a horrified witness at a nearby showroom begging emergency services to come quickly as Anna’s screams fill the background of the call.

In the disturbing audio released by Avon and Somerset Police of the December 28, 2019 incident with Anna’s permission, the caller can be heard to cry in horror: “Oh my god!”

“There’s someone being attacked. There’s a man attacking a lady,” she continues.

The call operator presses the caller on whether there’s any weapons.

The caller tells the operator it’s dark and she can’t see what he’s attacking her with.

“He’s going mad,” she tells him. “He’s ripping her face to shreds.”

“I think he’s got a knife. He’s smashing her in the face… he’s really hurting her. Can I go and intervene or not?”

The operator urges her not to step in for her own safety, while he arranges for an ambulance to be dispatched.

The screaming then suddenly escalates.

Butt fled the scene and he was arrested about 90 minutes later.

Anna was taken to hospital but her physical injuries have healed over time.

Anna agreed for police to release images of her injuries – and the terrifying 999 call made by the witness, in hopes of helping other survivors of domestic violence.

In a personal statement read out in court today, Anna said she feared the man she was married to for 18 years would kill her.

She said: “I was absolutely terrified.

“Throughout the attack, despite my constant attempts to fight back and disarm my attacker, I was thinking that I was going to die in that car park.

“I distinctly remember during the incident that I kept seeing my children’s faces before my eyes and also my parents’.

“When I realised that it was Alec, when I pulled his hood down, it confirmed what I already knew; I had been married to Alec for 18 years and I had real fears that he would do something like this.”

However, while physical scars have healed, Anna said she and her family had been left with a heavy emotional toll.

She said: “There are days where my anxiety is so high that I can’t face leaving the house.”

Butt continued to deny being responsible for the attack despite the overwhelming evidence collected by police.

He was found guilty by jurors in March following a trial.

The judge said the jury had seen through Butt’s lies – adding that the remorse shown since conviction rang ‘hollow’ as a result.

Following the sentencing, Anna said: “I would like to thank the help and support of the police, in particular PC Nina Foster, DC Katrina Collier, and PC Katie Douglass throughout the investigation and the trial. Their unwavering support has been key in seeing me through this case.

“Additionally I would like to thank the help and everlasting support of my friends and family whose faith and support in me and my children has been so appreciated – those who stayed true to me when I was in huge emotional turmoil was a tower of strength.

“I would encourage anyone suffering domestic abuse to reach out to the police for help. They will support you and you are not alone.”

PC Nina Foster said: “It’s hard to put into words how courageous Anna and her whole family have been to get us to this position.

“To say today’s sentencing marks the end of this chapter for them would be to downplay the seriousness of what has happened.

“But we hope it does bring some comfort to them that this dangerous man is safely behind bars.

“The photographs of the injuries Anna sustained will shock and appal people. But the mental and emotional scars that domestic abuse causes are often hidden and yet can be both more painful and longer lasting.

“Alec Butt is a violent abuser. His terrifying actions are inexcusable and have rightly seen him sent to prison.

“We hope today’s result and the bravery shown by Anna encourages other victims to contact police or to seek support from a trusted friend or relative. You will be believed and we can help make you safe.”

Why $1,400 stimulus checks could be garnished for unpaid debts