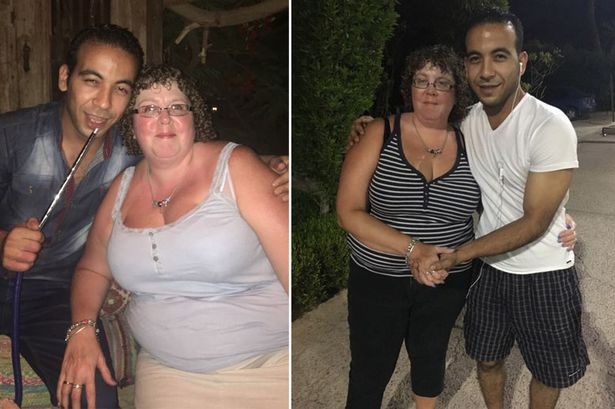 A woman was devastated when her Egyptian toyboy took £1,500 from her then dumped her saying: “You’re old and fat.”

Joanna Girling, 45, fell for Hassan Kahlied while on holiday with her husband, who she left to be with the 24-year-old waiter.

She even secured a fake marriage certificate so she could bed her new man.

But after sending her lover money and flying back out to Egypt to be with him, he ended their relationship by text, writing: “You very old – me marriage Egyptian woman [sic].” He also said she was fat.

Joanna added: “I thought Hassan loved me, he’d told me he wanted to marry me but it turned out to be a lie.

“He just used me for my money, I felt like an idiot. I gave up my marriage for him.”

Tesco worker Joanna and her husband had holidayed in Sharm El-Sheikh since 2001. She met Hassan on one of their trips there in 2018.

Joanna said she and her husband had been growing apart. She added: “Hassan was so flirty.

“He made me feel sexy for the first time in years. I began sneaking out in the afternoon to meet him. I wanted to sleep with him from the first day I met him. It was the best sex of my life. I knew then that I had to leave my husband.”

Once back home in Norfolk, Joanna broke off her 20-year marriage. While she waited for her return flight back to Egypt, she spoke to Hassan every day.

She began helping him with money for food and his bills. Two months later Joanna flew to Hurghada, where Hassan was waiting.

She added: “At first I was surprised, but he said it was the custom for men to deal with money.”

After a month Hassan asked Joanna to go home and save money for their future.

When she landed she received the shocking texts. She said: “I just didn’t understand.”

Joanna has since been back to Egypt and found love again, with Hysm Feygo, 38.

She said: “From the moment we met it was like we’d known each other a long time and he didn’t ask me for a penny.”

Meanwhile, Hassan said: “I’m so sorry about the money.

“It was because I am poor. I don’t want to discuss anything about my relationship.”